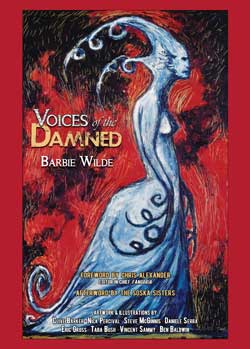 Voices of The Damned
By: Barbie Wilde
SST Publishing
215 Pages

Special Forward by Chris Alexander and Afterword by the Soska Sisters

A collection of eleven delightfully, dark and depraved stories to challenge your perception of the unknown and feed your appetite for what lurks within.

Sister Cilice: Sister Veronica’s unholy desires opens a gateway to hell and all beyond.

Zulu Zombies: John unleashes a spirit bottle that infects a legion of people into zombies.

American Mutant: Rev. Billy Bob Bannon an unscrupulous evangelist learns of a son he never knew he had who has a special gift of his own.

The Alpdrucke: Jim grapples with a reoccurring nightmare with sinister consequences.

Valeska: A Seminal on the prowl grapples with a Sangume revolt.

The Cilicium Pandoric: Part 2 in the Cilicium Trilogy finds the transformed Veronica restless and starts her own depraved sisterhood.

Gaia: The origins of a Goddess hell-bent on blood and vengeance.

Polyp: Vincent vies to survive the unearthly ramifications of a colonoscopy.

Botophobia: Lorraine faces her childhood fears in her parents’ home.

Writer’s Block: Bart, a washed up writer meets an enchanting fan with a most promising proposal.

Dark, ethereal, foreboding. It takes all of a paragraph or two for the faithful readership to realize just what caliber of writing they’ve stumbled across here. Although I was forwarded this gem if disturba from editor at SST Publishing Paul Fry an embarrassing amount of time ago, I believe this is the sort of anthology one has to savor and return to time and again. Each story is as unique as the one before. Twisted all-consuming landscapes with a prominent erotica undertone, Wilde not only challenges your perception but expands the imagination into a vortex of the forsaken and the blackness exhumed from our most repressed fantasies.

Constantly innovative with fresh ideas, these diverse tales contain relatable characters for all slices of life. Perhaps what’s most impressive his this talented author’s presentation of the anti-hero in the limelight of each tale. The protagonist often holds the most forbidden motives with the antagonist is directly the opposite of what we’ve became accustomed to seeing in contemporary literature. The vulnerable is high-lighted. As a result on a subconscious level we’re motivated to dig deeper into the proverbial guts of each expose. A most profound resonating affect occurs. Most guaranteed Voices of The Damned will remain a controversial topic of discussion among readers for years to come.

A special introduction kicks off the fray from one former editor of Fangoria magazine and current magistrate for Gore Zone and Delirium rags, Chris Alexander. It takes no time flat to see the special admiration for not only Ms. Wilde’s work but as a contributor to the genre and remarkable individual as well. Canada’s own Soska Sisters wrap things up nicely in their drafted afterword with sentiments for this decorated collection therefore certifying Barbie Wilde’s massive impact on the realm of horror and bursting open the flood gates for future terrifying endeavors.

Her writing stands on its own and will prompt many a restless sleep among a global market. Wilde’s legendary status of being the ying to Pinhead’s yang in the Hell Raiser series, really is inconsequential when it comes to her writing. Yet fans of the films will no question flock to this one of a kind anthology and with promises of such sights to be shown.

Wilde beckons you to the brink of her most inner sanctum’s imagination. Just when you’ve thought you can take no more, she boldly pushes you over the edge. I highly look forward to any future odyssey into the shadows of one Barbie Wilde. 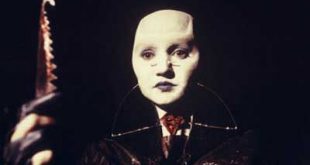