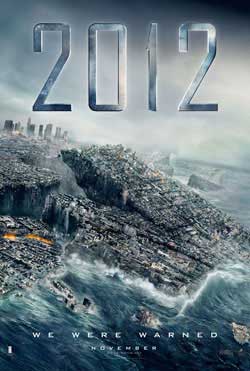 When typhoons, earthquakes and other disasters suddenly threaten to destroy the world, Jackson (John Cusack), his estranged wife, Kate (Amanda Peet), and others surmise that the secret may lie in ancient Mayan prophecies that describe global calamity in the year 2012. Roland Emmerich co-writes and directs a star-studded ensemble cast that also includes Thandie Newton, Oliver Platt, Woody Harrelson, Chiwetel Ejiofor and Danny Glover.

No it’s not 2012, though as they are advertising..”You’ve been warned” The reality is that the apocalyptic and prophesized date is a mere 2 years away. Of course with something “so” grand and at the subject of collections of books now, the public awareness is going to take note. For those who live in cave, the Mayans predicted that Dec 21, 2012 as the end of time. To be more specific, a global change, an event, or maybe several events…the votes are in. No, its not likely that we will look to John Cusak to save the world, but he does play a everyman’s hero pretty well. Though I would say check the facts for more specifics on that matter. We do know that the planets will align. What we don’t know is what potential impacts will arise. Solar flares, magnetic field adjustments, tidle waves, axis shifts, earthquakes…maybe all or maybe none. Though do you really think “they” would disclose that info anyway’s? The film takes the Hollywood approach and keeps alot of that technical data and historical data subdued. They are in it for the thrill ride and visual dynamics. I don’t blame them, as most folks would tire easily of the real backgrounds.

Also its a good thing that special FX have come so far, as the graphical display of sheer magnitude is a must see and overwhelming at that. Remember that title wave a the end of the “Abyss”? Well that’s only a portion of what the throw at you here. In retrospect the film has a collective impression of if you took, “Earthquake”, “Dante’s Peak”, The Day after Tomorrow” and “Deep impact” and combined them all under one roof. Since much of the destruction is viewed from planes, you get to see quite a bit of fallen cities and extreme damage coming at you. The display of course is absolutely breathtaking and probably doesn’t help the paranoia types.

Director Roland Emmerich helms this blockbuster with top name stars John Cusak, Amanda Peet, Woody Harrelson and Danny Glover. We are introduced to 2 years prior when the signs begin to emerge. Now approaching 2012 the “it’s too late” factor is causing a wave of immediacy that has the wealthy and government heads running for the doors. The plan is to quickly build “arks” which will support life and protect the passengers until its safe again. There is a political agenda which also picks on the societies fears that most will be left behind who don’t own the nations wealth or belong to the elite clubs of the world. This notion that we are seeing already in todyas economy is not so far from he truth. If you have a Billion to spare you get to live and ride on the super ship.

Well Jackson Curtis played by John Cusak is a struggling writer who was recently divorced from his wife and family. Kate Curtis (Amanda Peet) is raising the 2 kids and living with her new boyfriend Gordon (Thomas McCarthy). Jackson becomes the focal point of the film who’s book is recognized by one of the scientist involved Adrian Helmsley and also seems to keep crossing paths with all the powers that be. The premise and idea is pretty farfetched with his disaster dodging skills even being more farfetched but its all in good fun.

Like most films of this nature, an acorn soon grows into a tree of epic proportions. The effects begin and escalate on a pretty continuous basis. Woody Harrelson plays the eccentric but righteous conspiracy expert who runs his own pirate radio show. His role is kept minimal but it does provide a nice base of comic relief. Danny Glover plays President Thomas Wilson who is portrayed as a caring president with a higher conscience than agenda.

Other character dramas play on the groups of the selfish, powerful and innocent. Even with the world ending they still manage to finish on a positive note. Though only in Hollywood.

In all, this film is easily “the” Blockbuster of the year. It clocks at about 2 hours and 20 minutes but keeps the disaster scenarios constantly changing. There is already a bunch of films that have come out dealing with end of the world dramas but 2012 takes the award on pure visual theatrics. I’m a sucker for disaster films and 2012 ranks in my top 10 of all time.