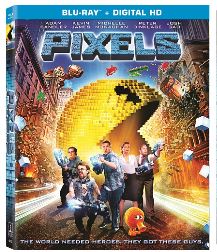 Fans can explore the various levels of PIXELS with the extensive Blu-ray and DVD bonus materials, including the music video Game On by Waka Flocka Flame ft. Good Charlotte and two featurettes that take a look at the beloved games featured in the film.  In Q*Bert, the adorable digital bit hopper comes to life, while Dojo Quest gives viewers a look at the new classic arcade game that gave life to the unstoppable Lady Lisa (Ashley Benson).PIXELS on Blu-ray includes even more exclusive, behind-the-scenes fun, with six additional featurettes, including looks at all the classic arcade game characters featured in the film and Creator of the Machine, which shows PAC-MAN creator Toru Iwatani on-set, talking about his experience and his take on PIXELS.

Viewers can also game play alongside the Arcaders using the Pixels Blaster App, a second-screen experience that lets viewers battle their favorite arcade legends and test their gaming knowledge while they watch the film.  The app syncs with the audio on the Blu-ray disc and the Digital version of the film.

The PIXELS Blu-ray is also exclusively presented with new Dolby Atmos audio, remixed specifically for the home theater environment, which delivers captivating sound that places and moves audio anywhere in the room, including overhead.

When aliens misinterpret video-feeds of classic arcade games as a declaration of war against them, they attack the Earth using games like PAC-MAN, Donkey Kong, Galaga, Centipede® and Space Invaders as models for their various assaults. President Will Cooper (Kevin James) has to call on his childhood best friend, 80s video game champion Sam Brenner (Adam Sandler) to lead a team of old-school arcaders (Peter Dinklage and Josh Gad) to defeat the aliens and save the planet.

o    Dojo Quest – A look at the new classic arcade game that gave life to the unstoppable Lady Lisa.

o   The Creator of the Machine  PAC-MAN creator Toru Iwatani was on-set and had a cameo, we hear from him about his experience and his take on PIXELS.

o   The Space Invader – The winner of an arcade contest had a walk on role in the film.

o   PAC-MAN – A detailed look at the PAC-MAN action sequence.  From Mini Coopers and stunts to visual effects, see how PAC-MAN chomps his way into real life.

o   Donkey Kong – See the cast perform stunts on a giant reconstruction of the classic platform game and watch as Donkey Kong goes from bits to BIG.

o   Centipede – The giant insect attack was the creation of visual and special effect planning as well as the patience of countless performers.

o   Galaga – This 80s arcade favorite leads the alien invasion, take an inside look at the attack on Guam.

PIXELS has a run time of approximately106 minutes.  The film is rated PG-13 for some language and suggestive comments.

All trademarks and copyrights hereof are the property of their respective owners.  All Rights Reserved.