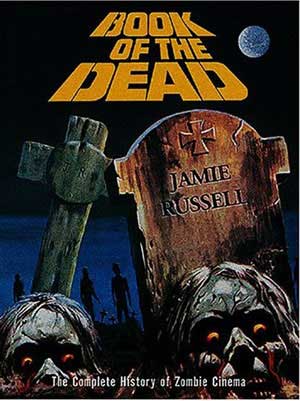 A scant five years ago, I would have beaten you upside the head for considering the idea of allowing the possibility to start to think about crossing your mind that I could get tired of zombies but here I am.

Sick. And. Fucking. Tired. Of. The. Goddamn. Walking. Dead.

I understand their cultural importance in our society at this time, honestly I do. Hell I’ve cornered people and forced them to listen to me expound on the idea way too often. But still I find myself just plain bored with them. Shuffle shuffle moan chomp rinse repeat and the world pretty much always ends at the end or the story meanders its way to a stop without really ending. I regularly hope that the film version of Max Brook’s World War Z drives the final nail in the genre the way that the novel did for the literary form.

And then I pull out my copy of Jamie Russel’s Book of the Dead and remember why I loved those drippy-dropsied bastards for so long.

Those in the know have been referring to this work at the definitive guide to and discussion of Zombie movies since it came out with good reason: you will find yourself hard pressed to come across anything more comprehensive. Do you honestly believe that the whole Zombie phenomenon started with Romero? Russell follows the genre back through the science-based and atomic undead of the fifties and the voodoo resurrections of early film to the first appearance of the word “zombie” in the English language all the way up to the Resident Evil video games and Shawn of the Dead. How’s that for comprehensive? With over 300 pages of coverage, I am sure that he missed some minor films somewhere but I’ll be damned if I know what they were.

However, volume itself isn’t enough, especially with such a high price tag. The information is well organized, very in depth and obviously comes straight from the heart of the author. This is a guy like many of us, with an honest love of the genre that moved well into the realm of obsession a long time ago. Any fool can give you an A-Z list of films with short descriptions (there is even one here, at the back of the book), but he gives us sooo much more. Russell understands that art exists as a cultural product and he spends as much time exploring the whys and wheretofors as an expression of deep seated fears linked to race, class and mortality within world culture. Yep, a zombie book with braaaaaaaaiiiiiiiins (I couldn’t resist) but written for actual people instead pretentious film or literature students, so he doesn’t come across as a smarmy d*ckwad.

Of course, as a Fab Press release, you know that there will be a practically insane amount of color and B&W stills to meet your visual need for carnage and bloodshed. Not only that, but we get plenty of domestic and foreign poster art and lobby cards to ogle. Even better, the binding glue on this one seems to be holding up much better than my copy of Art of Darkness that started falling apart within a month after purchase.

This is any zombie nut’s wet dream, but that is pretty where the attraction dies. What makes it so absolutely necessary for obsessive fanatics is also what will chase everyone else away. It’s ridiculously huge, frighteningly comprehensive and hefty enough to break a weaker coffee table (keep it away from those glass-top bitches) and the writing is pretty damn small. The point is that if you don’t already have a “Fulci Lives” bumper sticker, a shrine to Romero and go to every convention dressed up as the same damn shambler then you have no reason to give a rat’s ass about this book.

On the other hand if I just described you and you don’t already own this them you better get a copy now before we take back your union card and eat your f*cking spleen raw.