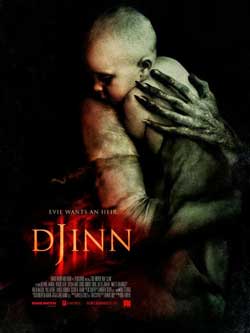 An Emirati couple return home from a trip and discover that their new apartment has been built on a site that is home to some malevolent beings.

The road to the release of Djinn, Tobe Hooper’s 19th feature, has clearly been a long and arduous one. Launched at Cannes in 2010, filming began in March 2011, post-production in August 2011 and by December 2011 it had its premiere in London with an audience of 300 people. So far so simple. But then the film wasn’t seen again till 2013, where it gave everyone a little wave at the Abu Dhabi film festival. Now it’s 2015 and you have to wonder what was holding back its release.

A fascinating article from The Guardian (‘The Disappearance of Djinn, the United Arab Emirate’s first horror film’) written in the arse-end of 2012, points out various outside forces that may or not have something to do with its troubles. The film is UAE funded and one train of thought goes that a member of the Abu Dhabi royal family found the film to be ‘subversive’; a claim that was immediately dismissed. Others suggest the representation of Islam in the film left a bitter taste in some people’s mouths. Then there’s the issue of the dialogue being mostly in Arabic – subtitles being sadly a surefire way of stopping the average person from wanting to a watch a horror. ‘Cut the literature and show us some blood.’

Whether the real reason is political or theological, having actually seen the film, I think a large issue is that for a film directed by the man who gave us The Texas Chain Saw Massacre, Djinn is surprisingly dull.

In a short opening monologue, we are told about a half-human, half-shape shifting demon (aka Djinn) waiting to be reclaimed by its mummy dearest. Meanwhile in America ex-pat couple, Salama (Razanne Jamal) and Khalid (Khalid Laith) have just had to bury their baby. Coupled with crushing depression, Salama can’t stop blaming herself for the death of their child. In order to regain some normality in their lives, doting husband Khalid suggests they move back to UAE to stay with her family. A proposition Salama could clearly do without. Once they move into their new home, Salama is still unable to relax due to the unexplained phenomena happening all around. From disembodied wailing that can be heard at night, to her suggestive creepy neighbor (Aiyasha Hart), there’s nothing on show that would put a grieving mother at ease. Just wait till she finds out about the land her new apartment block is built, that’s going to blow her mind.

Clocking in at just under 90 minutes, Djinn is as wispy as a teenage boy’s first moustache. It’s so brittle, a light scrutiny is enough to shatter it. We all know Tobe Hooper is better than this. Maybe not recently, but back in the day he would have made a film that’d have torn your skin off in fright and offered it back to you and as crispy chicken. This is flat storytelling that tries vaguely to get your attention like a kitten throwing a cotton ball. Even the prospect of a J-Horror with an Arabic twist does nothing to engage the synapses. Djinn just plods along with all the flexibility of a Sherman tank, ploughing on through so it can get to credits and end this nonsense. At one point, there’s even a suggestion that this could be a cheeky remake of Rosemary’s Baby, but then you just think to yourself that you could just as easily be watching Rosemary’s Baby. 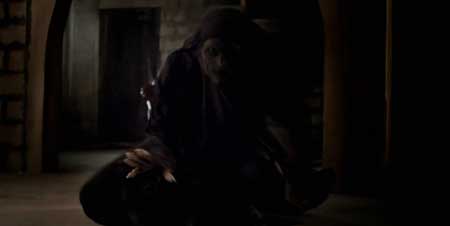 I am not saying that Tobe Hooper did this film solely for the cash and a nice holiday abroad. I am heavily hinting that the direction and focus of this film is so poor, it suggest that the director had one eye on the monitor, whilst the other was seeing if the ink had dried on his check yet. This is perhaps one for the Hooper completest only. Everyone else should look elsewhere.