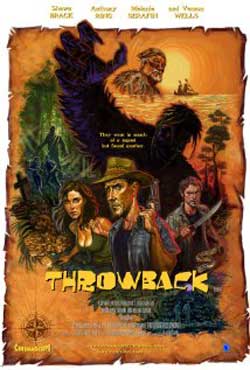 Two Treasure Hunters , a forest ranger and an unhinged ex cop, have a run run in with a Yowie , Australia’s answer to Bigfoot, while looking for lost treasure in the jungles of Far North Queensland.

Oh the Sasquatchplotation film, one the the truly remarkable little sub genres that resides under the horror film banner. I might just be

a glutton for punishment but oh how I do love any film with a giant bi pedial creature running around causing chaos and destruction , be it semi big budget or small in scale , the Yeti is really a creature after my own heart. Now Mr. Big Feet has largely been ignored by big budget companies and major players so most films with him at its center have been low fi and independent ,which works out great for this old girl.

What other film sub genre would be ballsy enough to pair the great auteur David A. Prior ( come on, dude gets a life pass for Sledgehammer alone! ) with the majestic talents of the great Reb Brown ( Sword and The Sorcerer, Howling 2 Your Sisters A Werewolf ) to create Night Claws which was one of the best movies the year it came out ( 2013 to be exact ). Yes, the Sasquatchplotation film is one of rather dodgy quality and is very divisive among horror fans but for those of us that love and cherish the big hairy guy we really do love and cherish him dearly. Throwback is the newest film to toss the big hairy guy front and center and yes my beloved and devoted big footaphiles it is a film that seems to be tailor made for us big foot fanatics. Not only does the film incorporate the monster we all know and love into the mix it is also a loving homage to those kick ass 80’s action adventure movies we all first cut our baby teeth on i.e Predator , Xtro 2, Carnosaur 2,3.

Throwback starts off with a literal bang as we meet worldly explore Thunderclap Newman ( haha some of you will get the reference I hope ) as he comes upon a large majestic treasure and is quickly ripped to pieces by something large and hairy. Right from the jump off it is obvious that director Travis Bain isn’t shy about showing what his creature is made of , rather than hiding the beast in the murky shadows he is pushed front and center from the get go and the risky choice pays off in spades ( cool creature effects and sound design ). We are treated to a small section of the film in which the creature is kept off screen for a minor amount of time and granted it might come across as a bit dull to some viewers. However , if you are into 80’s action adventure films and pure machismo than you should be good and entertained during these monsterless moments.

We quickly move to the modern era and join two treasure hunters , the Australian Jack ( Shawn Brack ) and the menacing American Kent ( Anthony Ring ) , as they plunder through the wild bush searching for the legendary Thunderclap’s gold. Nearby a local forest ranger , Rhiannon ( Melanie Serafin ) , soon sees what she deems to be a camp fire or sorts and it isn’t long before she is intertwined with the two men and the monster that pursues them. Jack is eventually double crossed by Kent and must fend for himself as he tries to reclaim his fortune and get fend off the impending danger that lurks in the forest. Throw in a bad ass cop , Detective McNab ( Vernon” Fuckin” Wells Plughead himself from Circuitry Man ) ; a quick crisp pace; fluid directing style; cool practical creature work, and you have yourself one sick ass ball of cheese that is sure to entertain. 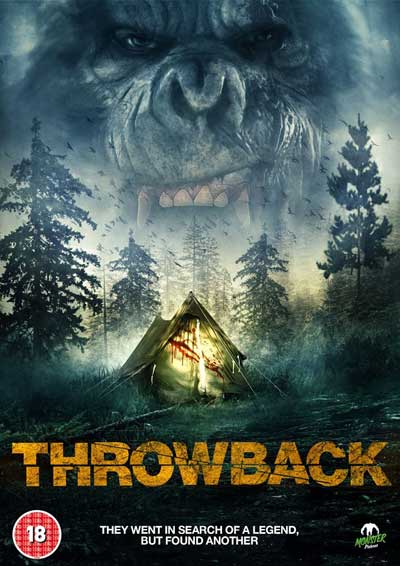 Throwback is a shit ton of fun to be had on almost every imaginable level, it reminded me of some of the old school Australian indies that use to line the shelves in multitude i.e Fair Game , Dark Age, Next Of Kin.  Travis Bain is to be commended and applauded for using his limited resources to create a film that is lean mean and nasty in all the right ways , he keeps the pace a break neck speed that only lets up once the credits begin to roll.

Mr. Bain  is able to create a film that kept me literally on the edge of my seat the entire time it was onscreen , not only was it an engaging Sasquatch tale ( called a Yowie here ) but the adventure aspect truly reminded me of those great action films from my youth and stroked this little ladies nostalgia bone something wicked. If you love creature feature or just indie cinema in general do yourself a favor and pick up Throwback ASAP!!! , this is the exact kind of goofy, intense good time that I always search the shelves for, really hit the spot. If there is a little kid somewhere deep within that remembers pouring over those musty bins at the local thrift shop hoping to find that bit of greatness to add to the collection, here it is. Throwback is the best 80’s actioner to NOT HAVE come out the 80’s , it really is just a fun ,fantastic , kick ass good time. ENJOY!!!!