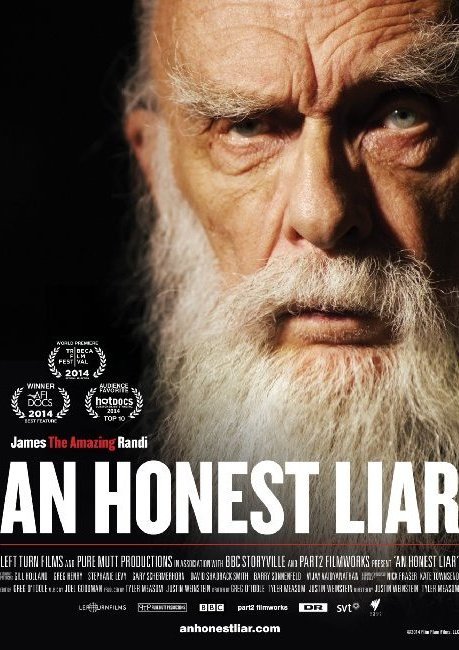 Since its world premiere at the 2014 Tribeca Film Festival, AN HONEST LIAR, the documentary on James ‘The Amazing’ Randi, has amassed “best documentary” festival awards and critical acclaim, including being chosen as a New York Times “Critic’s Pick”. After a successful nation-wide theatrical release, the film has been at the top of the iTunes documentary chart since its digital release, and currently sits at the #1 film spot in the genre. AN HONEST LIAR is also available on Google Play, Amazon Instant Video and Vimeo on Demand.  The film will be available tomorrow, June 30, 2015, on Blu-ray™ and DVD.

AN HONEST LIAR is a feature documentary about the world-famous magician, escape artist, and world-renowned enemy of deception, James ‘The Amazing’ Randi. The film brings to life Randi’s intricate investigations that publicly exposed psychics, faith healers, and con-artists with quasi-religious fervor. A master deceiver who came out of the closet at the age of 81, Randi created fictional characters, fake psychics, and even turned his partner of 25 years, the artist Jose Alvarez, into a sham guru named Carlos. But when a shocking revelation in Randi’s personal life is discovered, it isn’t clear whether Randi is still the deceiver – or the deceived.

The release of AN HONEST LIAR falls at the perfect time to join in the celebration of the historic Supreme Court decision legalizing same-sex marriage in all states. The film shows the struggle Randi and his partner had to endure to remain together as a couple before the new same-sex marriage decision, and their story is not only inspiring but a testament to the importance of being true to yourself and following your heart.

The Blu-ray™ and DVD will include ample bonus features, including:

To learn more about the film, please visit anhonestliar.com/.