A Film by Dean C. Jones 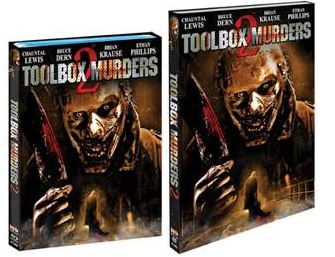 The handyman of horror is back with a new box of tricks and fear in Toolbox Murders 2, a highly anticipated follow-up to the 2004 Tobe Hooper-directed slasher classic.  Directed by legendary special effects artist, producer and filmmaker Dean C. Jones (Dark Awakening, X-Men: First Class), TOOLBOX MURDERS 2 stars Chauntal Lewis (Séance), Oscar® nominee Bruce Dern (Nebraska), Brian Krause (Stephen King’s Sleepwalkers), Clifton Powell (Ray), Chris Doyle (Toolbox Murders) and Ethan Phillips (Star Trek: Voyager). Picking up directly after the shocking events of the previous movie, TOOLBOX MURDERS 2 ratchets up the terror as it follows one of Hollywood’s most twisted killers. Resurfacing in the darkest corners of the L.A. underworld with a serious axe to grind, the killer hammers out a plan to put the screws to a new victim!

On August 4, 2015, SCREAM FACTORY™ is proud to present c on Blu-ray™ and DVD. Arriving for the first time on Blu-ray, this definitive home entertainment release features anamorphic widescreen movie presentation and more! A must-have for horror enthusiasts and movie collectors, TOOLBOX MURDERS 2 Blu-ray is priced to own at $19.97 SRP. The DVD is available at $14.93 SRP.

Hollywood, California is turned upside down by a series of strange and horrific murders creating chaos and turmoil in tinsel town. One particular victim is kidnapped, held captive and subjected to witness the torture and murder of numerous other victims. It is by her will, strength, and faith that she must survive the ordeal. Her escape seems hopeless and only worsens when outside supernatural forces become more difficult to contend with than her captor…