Film Review: The Strange Color of Your Body’s Tears (2013) 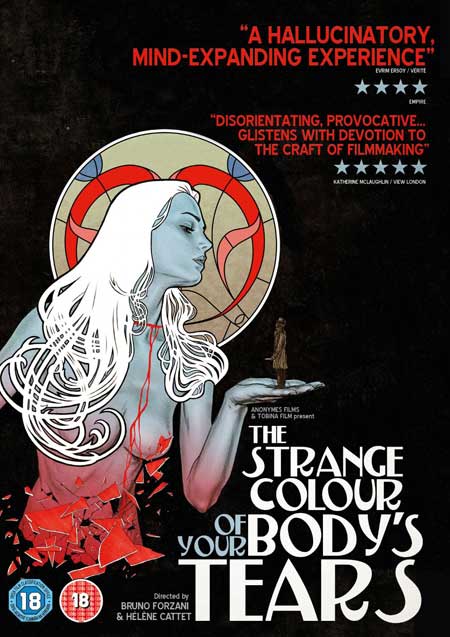 When a man returns home from a business trip, he discovers his wife has disappeared. He investigates, following many leads through the nooks and crannies of his apartment building, but to little avail. Lots of people die in the process.

The story begins when Dan Kristensen, played by Danish actor Klaus Tange (Flame & Citron, 2008), returns from a business trip. When he arrives at his apartment, his wife, Edwige, does not answer his knock and the door is chained from the inside. When he breaks the chain, his wife is nowhere to be found and the messages he has left her on the answering machine during his trip have not been accessed. Dan asks a stranger in the hall if he has seen his wife, and the man hurries away without responding. Next, Dan tries all the apartment buzzers and asks everyone who answers if they have seen his wife. Finally, someone asks him up to the 7th floor.

There he finds a woman dressed in a black lace dress, black lace gloves, and black, ankle-height, buttoned-up, high heel shoes sitting in a chair, enveloped in shadow except for her legs and hands. She whispers to Dan that she does not know his wife, but that her husband, Paul, has disappeared as well. The woman in black lace begins to tell Dan the story of her husband’s disappearance. Paul had begun to hear strange noises in the building and one day, after a time, the noises culminated in a short scream followed by murmuring voices that seemed as if they are coming from the room above them. Paul binds and drugs his wife, presumably to keep her from calling the police although it really isn’t clear, and begins to investigate by hand drilling a hole in the ceiling. When his drugged, but now unbound, wife wakes up, Paul is calling to her from the room upstairs through the hole he drilled. He says he cannot see and asks her to pass him a match through the hole. She lights a fireplace match and passes it up through the hole. Later, she hears a scuffle, the zing of steel on steel, and several thuds as if a body has fallen. She stands atop a chair, attempting to look through the hole in the ceiling and a single drop of blood falls through the hole onto her cheek. An eye that is obviously not her husband’s eye then appears in the hole. As she is telling the story to Dan, she describes the eye as being filled with madness and hatred.

At that point, Dan decides this has little to do with his wife’s disappearance and cuts her off. Of course, after hearing that much of the woman’s story, Dan can’t stop himself from going upstairs to investigate. He ends up going through a door that exits to the roof and discovers a nude brunette woman standing silently, looking out over the city and smoking a cigarette. 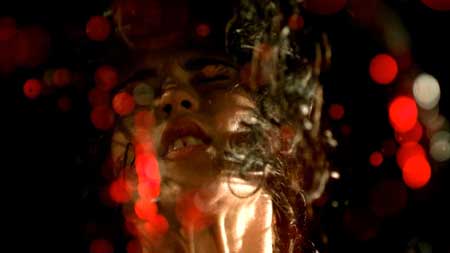 This is only 20 minutes into the film and it is the last time I felt like I had a handle on what in the world was going on. During the rest of the story, Dan calls the police – enter a police inspector played by Jean-Michel Vovk, who also appeared in Amer, the directors’ previous film. The inspector feels the need to tell Dan a “similar” story that again seems to have no bearing on the case of Dan’s missing wife. Other key male characters are the building’s landlord and a mysterious man who lives in other tenants’ apartments when they are gone and without their knowledge. The four males in the story – Dan, the inspector, the landlord, and the mystery squatter – all encounter brunettes named Laura. I think there are a total of four Laura’s, but it’s pretty hard to tell how many there are for sure. For that matter, there were three Dan’s at one point, or was it four? In the end, I really didn’t know for sure who did what.

On the other hand, this is one of the most visually mesmerizing films I’ve ever seen! Every shot was meticulously constructed in framing, lighting, and set design. I was fascinated by the imagery the filmmakers created, at once stunningly beautiful and nightmarishly hallucinogenic. I’m sure that several scenes were actually dreams a character was having, but the reality of this film’s world was so surreal it was impossible tell the dreams from the reality. There were also numerous recurring visual themes, one of which was a dagger wound that bore an amazing and intentional resemblance to an open vagina.

The apartment building set consisted of muted colors with detailed, ornate, and unique, geometric designs that often elicited a sense of life. The walls curve into the ceiling with matching curved woodwork and elaborate paintings and patterns on the walls and ceiling. Frequent use of stained glass, ornate ironwork, figures, statues, dolls, daggers, and straight razors added to the visual feast. I’m tempted to make a long list of the images that have stuck with me from this film, but I don’t want to spoil the astonishment of discovery for the first time viewer.

The sound design perfectly fit the sensual nature of the film. Many of the sounds were gritty and exaggerated while others were muted and ethereal. I also enjoyed the soundtrack though I’m hard pressed to describe it. I thought I heard a segment of Iron Butterfly’s In-A-Gadda-Da-Vida during one scene but couldn’t find it in the credits. At any rate, it was a good fit.

This film seems to elicit extreme opinions from viewers based on the visuals versus the plot or storytelling. The Strange Color of Your Body’s Tears was written and directed by Hélène Cattet and Bruno Frozani, the same pair responsible for Amer (2009) and the “O is for Orgasm” segment of The ABCs of Death (2012). If you’ve seen ABCs of Death and remember “O is for Orgasm,” you will recognize some of the same imagery in this film.

The Strange Color of Your Body’s Tears was produced by the Belgium company, Anonymes Films, which also produced Amer. According to its website,

“… Anonymes Films aims to combine an authentic artistic vision with a perfect command of film making, in order to create an outstanding visual experience. Noir and fantastic movies, pulps and slashers are not only revisited but reinvented, triggering a firmly modern reflection on Genre films. This policy guarantees the emersion of quaint masterpieces with distinctive visual features.”

I think they have accomplished their aim in this film. Kudos go to Cattet and Frozani (directors); Manuel Dacosse (cinematography); Daniel Bruylant, Mathieu Cox, and Olivier Thys (sound); and Julia Iribarria (production design).

Returning to the plot vs. sound and visual experience argument it is impossible to give this film a single rating. On a scale of 1 to 5, I’d give the storytelling a 1. If you like your movies with a logical plot, and you expect dialogue to make sense, and at the end of the story you’d like to know whodunit, run the other way! On the other hand, I’d give the sound and visual experience a 5. So if you can be entertained and fascinated by the visual and sound experience of an art film, this just might be your cup of tea.