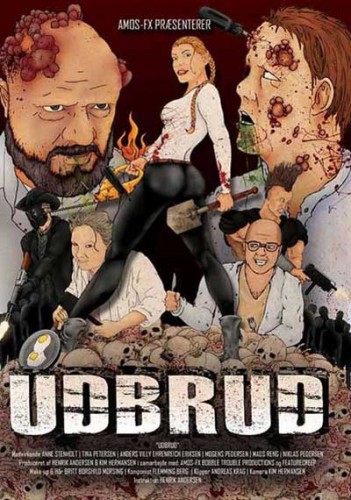 In a World on the verge of collapse, a Young girl must use her survival instincts to survive the destructive epidemic that suddenly breaks out, and ravages her once safe childhood home.
Pustule Infected creatures of pure horror, wrought from the deepest depths of hell, stand in line to make life miserable for “The Girl With No Name”.
But they have disturbed the wrong Girl.

I’m going to say something here, some big words and high praise, that I hope to do justice with the following review: this movie is easily one of my favorite movies I have ever reviewed for HorrorNews.net. This is the type of movie that you just can’t wait to tell someone about, the type of movie that almost makes you that you hadn’t heard more about it, more people raving about it. What is it, this movie I need to share with all of you? Udbrud (aka Outbreak to us English speakers), a brand new Danish horror movie by director Henrik Andersen. You can finish reading my review, but I’ll straight up give you some advice right now: find it (www.udbrud.dk), buy it, love it.

So, why is this movie so good? Let me tell you. I think the best way I could describe it would be as a modern day Django but with zombies, but that still doesn’t give you even half of the picture. It is a movie that shows it’s influences like posters on a wall (much in the Quentin Tarantino, Rob Zombie kind of way), but never takes itself too seriously (which is a very welcome approach, if I may say so). After opening with a loud social commentary on how humanity has gone from struggling to preserve itself (images of the Dark Ages and the plague) to actively working to destroy itself (junk food, greasy fast food, obesity, etc), we cut to the perfect little subdivision. 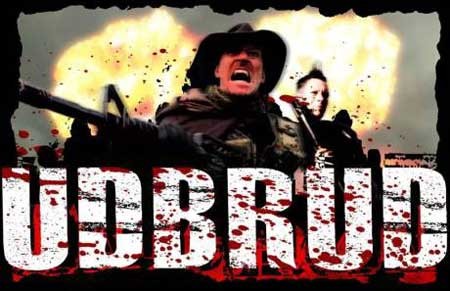 Children are playing, families are smiling, a little kid in a wheelchair rolls by and waves at everyone (and a squirrel waves back). Inside a house, a woman cooks for her daughter and husband – a breakfast of runny eggs and baked beans (?). The daughter is disgusted, but the husband eats up, slopping the food all over himself with a vengeance. While he eats, his wife notices a boil on his neck and pops it, inadvertently squirting its contents all over her face (there is a very early-Peter Jackson vibe here, and I love it!). She pukes on him, he pukes everywhere, and next thing you know, they are oozing, boil-covered zombies (for lack of a better word – they are infected with something, that is for sure). The daughter runs outside and quickly sees that her parents are not the only ones, the entire neighborhood is infected. All hell breaks loose as she tries to escape. 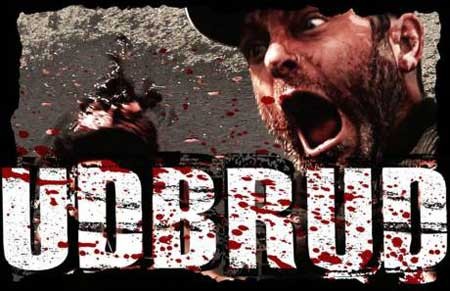 Udbrud does so many fun things, things you’d think have to have done before, but have they? If you like over the top blood and gore, this is the movie for you. Organs are torn out, flesh is eaten, limbs are chopped off, and that’s not even the half of it. The main character, played by Anna Stenholt, is simply named “The Girl With No Name,” and she seems to be the only one able to escape. But we quickly see, no matter how hard she fights, she is pretty much surrounded on all sides. And that’s when it gets even better. There are some great gore scenes, especially given the budget, but even more exciting is when the live action takes the more animated form of comic book-like panels, and we get to see some real zombie slaughter. It’s a little like the animated section of Kill Bill, volume 1, but at the same time different and wholly original. We get the full blown decapitations and dismemberments in a way that fits into the budget while still avoiding the cheesy look.

I’ll be honest, I kind of hope that this is just the beginning. I could definitely see The Girl With No Name taking on a full length movie set in a post-zombie outbreak wasteland setting (as we see a hint of in the final scene). But for now, we can be satisfied with Udbrud, and amazing short film (around forty minutes in total) with so much energy and so much gore and bloodshed that it’s nearly impossible to hate on it. It manages to take on a zombie-style plotline in an era horribly over-saturated with zombie movies and shows and culture, and still deliver something new and interesting. That, in itself, is an accomplishment worth applauding. With nods to The Road Warrior, Thriller: A Cruel Picture, and so many more classics, Udbrud is a must see for any horror or exploitation fan. If I rated movies with stars, this would get a 5 out of 5 rating from me, without a doubt. I absolutely loved this movie, and I hope to see more from Andersen soon. 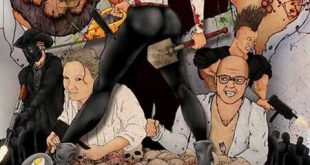