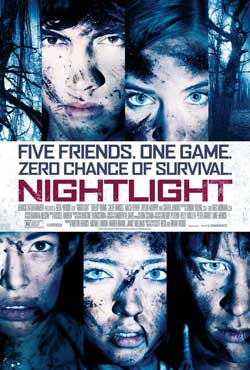 Five friends play a game in a ”mysterious” forest with a long history as a beacon for troubled young people contemplating suicide.

I used to champion found footage films. I mean, really champion them. Pin my colors to the mast and everything. Keep your Giallos and cannibal movies, the found footage was my niche. The Blair Witch Project, The Last Exorcism, VHS, REC, The Tunnel, Open Windows… All of them great examples of what can be done with the simple medium of sticking your camera in front of someone and wobbling it around a bit. As the years have gone by, my enthusiasm has waned as I have been pelted monthly by irksome entries in the genre. Maybe, I think to myself, it’s because we’ve all become too savvy now; it’s become far harder to convince us that what we’re watching is real. Or maybe, there’s nothing wrong with us. Maybe we’re all just fine. Maybe it’s the films that are getting worse. Take for example, Nightlight; a haunted forest ghost story from co-directors/writers Scott Beck and Bryan Woods (The Bride Wore Blood).

Stop me if you’ve heard this one before, but a group of kids take a midnight into the woods to play games with their torches, tell ghost stories and flirt in the hopes of rubbing some of their bits against each other. Amongst the horny rabble is Robin (Shelby Young), an outsider to the group who is still somewhat traumatized by her friend’s suicide. So, in hindsight, frolicking in these particular woods was probably a bad idea when legend has it – there’s always a legend isn’t there? – those who outstay their welcome in the woods will incur the wrath of the nefarious spirits that lurk within, and meet a fate worse than being thrown off a cliff. They’ll be harassed, hounded by wolves, attacked by snakes, locked in closets and THEN thrown off a cliff. See, much worse.

Nightlight doesn’t want you to think it’s an average found footage film. No, it’s completely aware of how jaded the genre is making you, dear viewer. Therefore Nightlight’s USP is that instead of the usual go-pro camera, camcorder or iPhone to record the ‘horrifying’ shenanigans, we see everything from the point of view of the group’s torches. Yes, their torches. I probably should commend the filmmakers for trying something new. However, it has a detrimental effect on what is already a wafer-thin premise.

Whilst the torch’s POV means we get around the idea of why someone would be filming constantly their friends being slaughtered, it doesn’t make the movie experience any more gratifying. The thing is… the need to keep a torch perfectly steady isn’t as demanding as, say, holding a video camera. After all, one has to move a torch around to actually see things in the dark. That’s their purpose. As a result, a lot Nightlight is simply taking the ‘shakey-cam’ trope to its logical and inevitable death. It’s like trying to watch a film whilst bouncing around a washing machine. When the picture does remain steady it’s usually in preparation for the stillbirth of a scare. Once you become attuned to this pattern, what remaining joy or interest can be found in Nightlight – and you really will be pushed to find some – dissipates immediately. 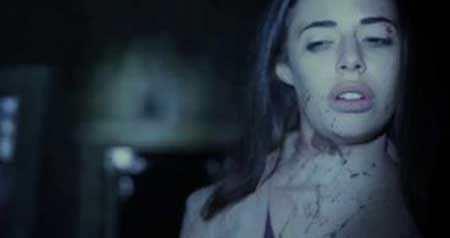 It would be nice to finish my review on a good point. For example, by suggesting that removing the gimmicky production, in favor of a more traditional storytelling process, would have saved it. However, the fact is, with Nightlight being such a potent c**ktail of other people’s ideas there’s nothing surprising to be found. Maybe, just maybe, things could have been redeemed had the film been cut down by about 80 minutes and used as a segment in an anthology. But we’ll never know.

Nightlight tried to do something different, but instead built a gimmick on the foundation of a tired genre and lackluster plot. It’s a case of style over substance and, even then, the style wasn’t pleasant to be around.