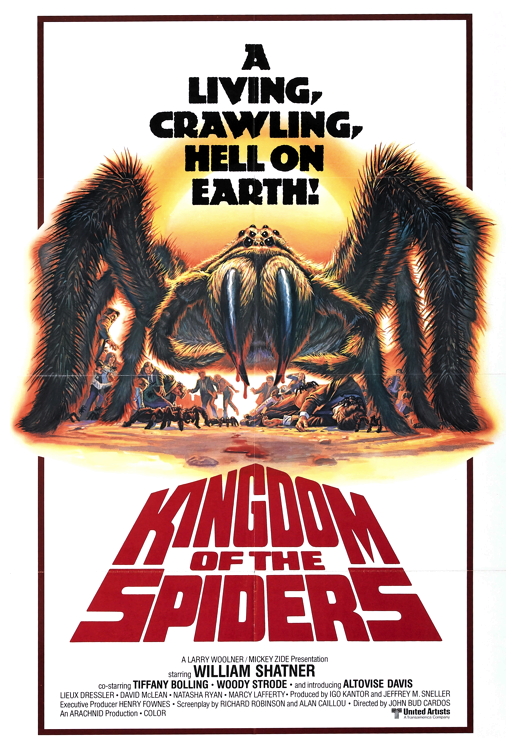 SYNOPSIS:
“In the countryside, after the death of the awarded calf of the farmer Walter Colby, the veterinary Doctor Robert ‘Rack’ Hansen sends blood samples to be analysed by the University. A couple of days later, the scientist Doctor Diane Ashley comes to the location and tells that the animal was bitten by spiders and killed by a massive dose of their venom. The skeptical Rack heads with Diane to Walter’s farm and they find a huge spider nest in the field. Further, they find that the town is surrounded an enormous number of killer spiders and there is no where to run.” (courtesy IMDB)

REVIEW:
Even the most avid fans of seventies kitsch cinema will have difficulties defending this week’s creepy-crawly creature feature, Kingdom Of The Spiders (1977), basically because it’s garbage from Go to Whoa – and I do mean woe. But it’s extremely entertaining garbage, with rotten writing and acrid action sequences guaranteed to keep us amused as we pick through the trash like a hungry tabloid journalist. None other than charismatic starship captain and professional cool dude William ‘The Shat’ Shatner stars as a veteran…um, ventriloquist? Vegetarian? He plays an animal doctor in a small country town that develops a huge spider problem on very short notice. Arachnophobes may be pleased to learn that the spiders aren’t giant, and may be disturbed to learn that there’s a lot of them, but may be delighted to see thousands of real spiders actually perish on-screen – more about that later. Right now you should roll up that newspaper, stay away from any dark corners and get your feet up off the floor as we experience together the seventies spider-snuff movie Kingdom Of The Spiders! 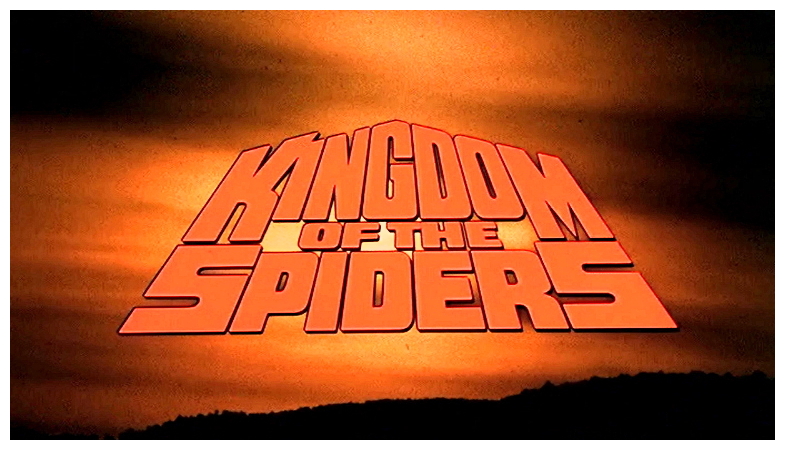 This eight-legged freak-fest concerns a nest of tarantulas that suddenly go against all their natural instincts and start munching on cows, with the local yokels on the dessert menu. It’s because we unthinking humans have destroyed their normal food with pesticides, so the hungry-hungry spiders have decided to go to town. Literally. My old mate Neil Gaiman once told me there are spiders whose bite can cause the limb to rot and to die, sometimes more than a year after it was bitten. As to why spiders do this, the answer is simple. It’s because spiders think it’s funny, and they don’t want you to ever forget them. Much like my editor, but not as venomous. Director John ‘Bud’ Cardos was previously an actor in some dreadful drive-in horror movies himself, and he clearly had great fun making this old-fashioned Nature-Strikes-Back movie – so why shouldn’t you? I’ll tell you why – he throws in a couple of rather inappropriate country-and-western songs for our teeth-grinding pleasure. 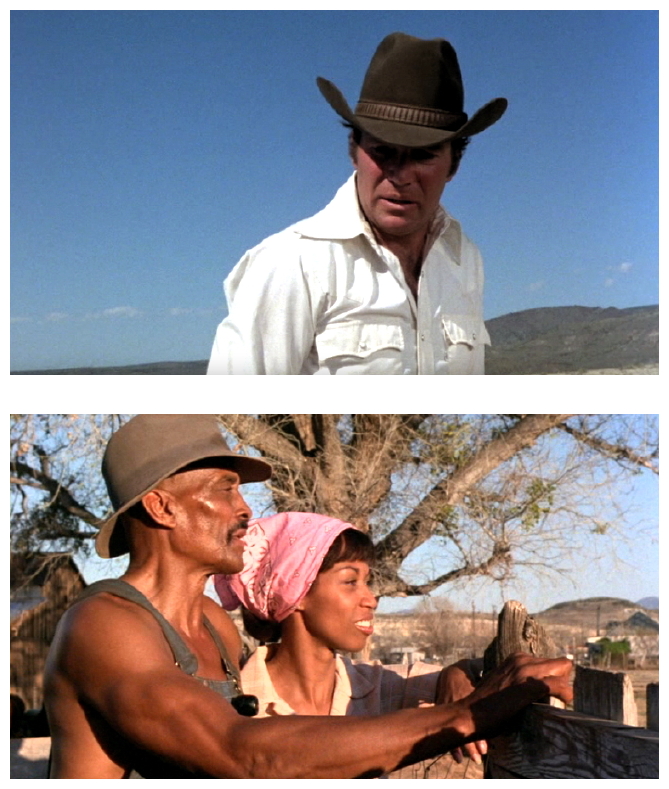 Speaking of annoyingly repetitive music, the instrumental soundtrack is made up of stock music by Jerry Goldsmith and Bernard Herrmann from the old Twilight Zone television series, so don’t be surprised if you find yourself humming along. One of the most famous Twilight Zone stories starred a baby-faced William Shatner as a former loony who spots an evil-looking gremlin on the wing of his plane. The Shat’s career wasn’t exactly soaring when he agreed to star in this week’s landfill, a decade after the Star Trek television series and two years before Star Trek The Motion Picture (1979), and his vet beset by pests in this embarrassment was pretty much the most substantial role he’d have between stints as Captain Kirk. If The Shat felt embarrassed about what his life as an actor had come to, he certainly doesn’t show it, ingratiating as a beer-drinking cowboy-hat-wearing clear-headed man of science who has to be convinced that a nest of angry tarantulas poses a threat by an entemololo…um, enterotomist? Interocitor? She’s a bug expert played by Tiffany Bolling. 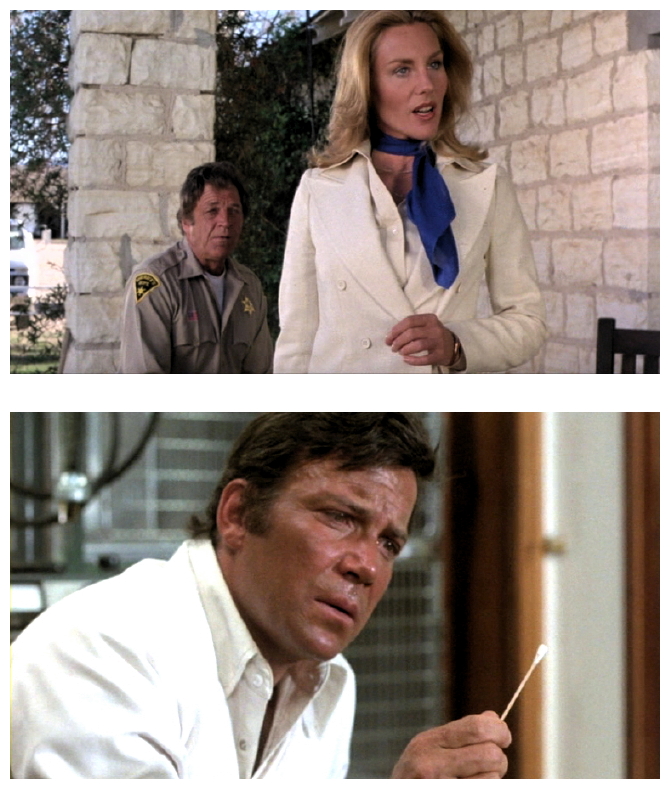 With a few dozen television appearances under her belt, Tiffany Bolling‘s most interesting role was as The Spider Lady in the Sid Krofft and Marty Krofft superhero send-up Electra Woman And Dyna Girl. The producers of Kingdom Of The Spiders, who obviously watched a lot of Saturday morning television while stoned, spotted Bolling and cast her immediately (they were very disappointed to learn she didn’t own the outfit). The cast also includes Marcy Lafferty, who was married to The Shat at the time – making her Mrs Shat, I guess – and Altovise Davis was married to Rat-Packer Sammy Davis Junior. Furthermore, Mildred the telephone operator was played by Tiffany Bolling’s mum Bettie Bolling, and the little boy covered in spiders was the director’s own son, no doubt resulting in a few psychological issues. 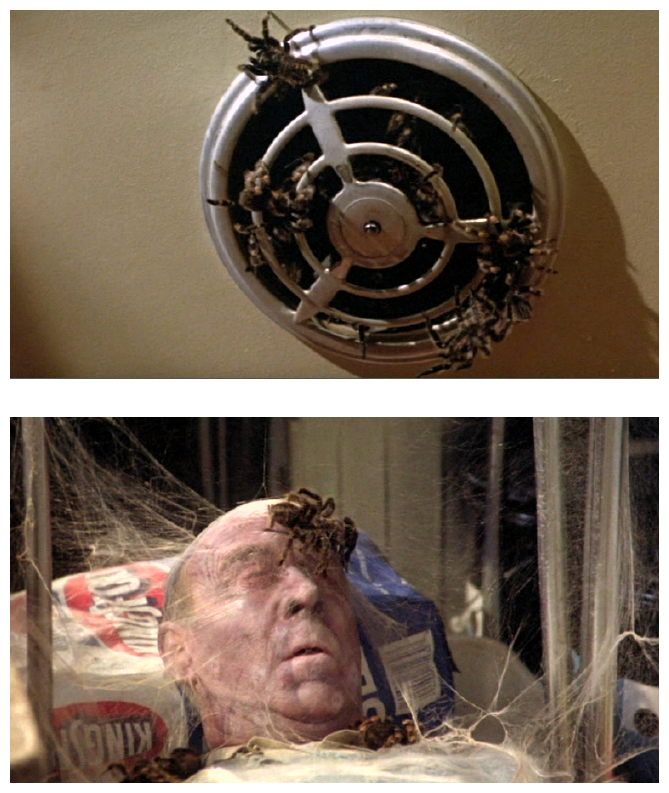 Woody Strode, who plays Walter Colby, is probably best known for his role in the Lee Marvin/Burt Lancaster western The Professionals (1966), and this is the final film for Roy Engel, who appeared in more than two hundred schlocky classics like The Man From Planet X (1951) and The Indestructible Man (1956), which I reviewed for your pleasur…um, which I reviewed last year. You may find this rather hard to believe, but two people involved in the movie’s production went on to win Oscars. Makeup artist Ve Neill won for her work on Tim Burton‘s Ed Wood (1994) and the inexplicably popular Mrs Doubtfire (1993), while film editor Steven Zaillian went on to win the screenplay Oscar for Schindler’s List (1993). 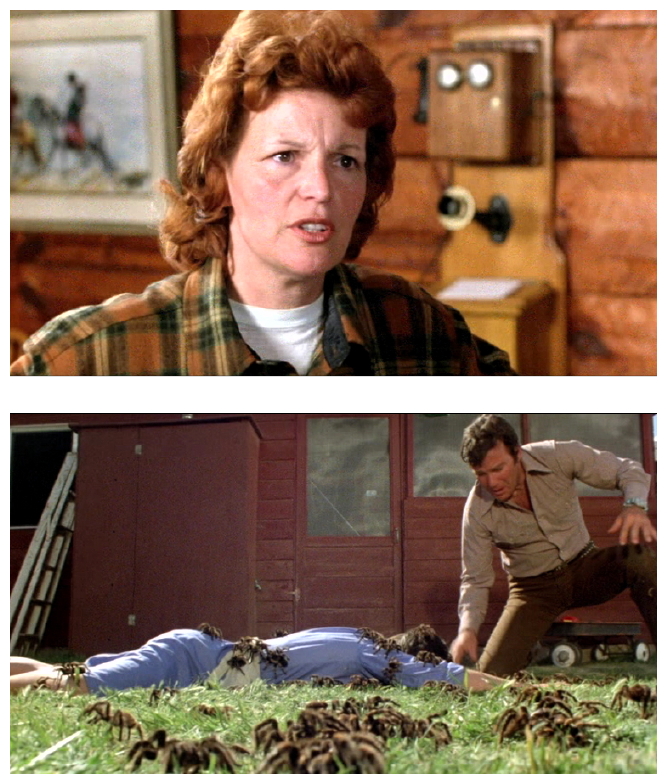 But the real reason you’re here, of course, are the eight-legged freaks. Five thousand real tarantulas and lots of fake spiders were used to beef up the numbers. Mexicans were offered ten dollars for every live tarantula they could find, which means that 10% of the film’s US$500,000 budget went to the arachnids, but there were hidden costs involved. Not only did each spider have to be kept warm but all five thousand spiders had to be kept in separate containers because of their cannibalistic tendencies. The filmmakers soon learned another lesson: Tarantulas are normally very shy around people, so air-hoses had to be used to get the spiders to walk towards their victims. You’ll notice in a number of spider attacks it’s quite obvious that the tarantulas are usually moving away from their intended victims. 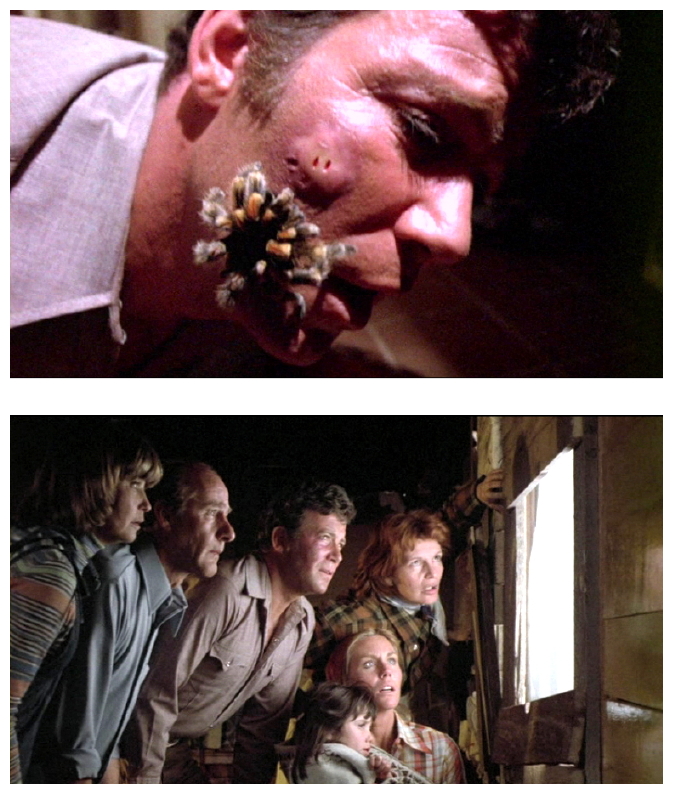 Kingdom Of The Spiders gives new meaning to the word ‘cheap’. Not only is the cast full of family and friends but, when the crop-duster crashes into the service station, the lead actors are actually standing right there, substituting for expensive stuntmen. Of course, the film owes a lot to Alfred Hitchcock‘s The Birds (1963) and Steven Spielberg‘s Jaws (1975), about normal-sized creatures threatening community events, but the movie also works as a prototype for nineties horror comedies like Tremors (1990), in that it’s also about a handful of quirky characters concocting cunning plans to ward off impending catastrophe (except those movies were good). A sequel to be directed by The Shat himself was planned in the late eighties but was shelved indefinitely, probably because the producers saw the lamentable Star Trek V The Final Frontier (1989). 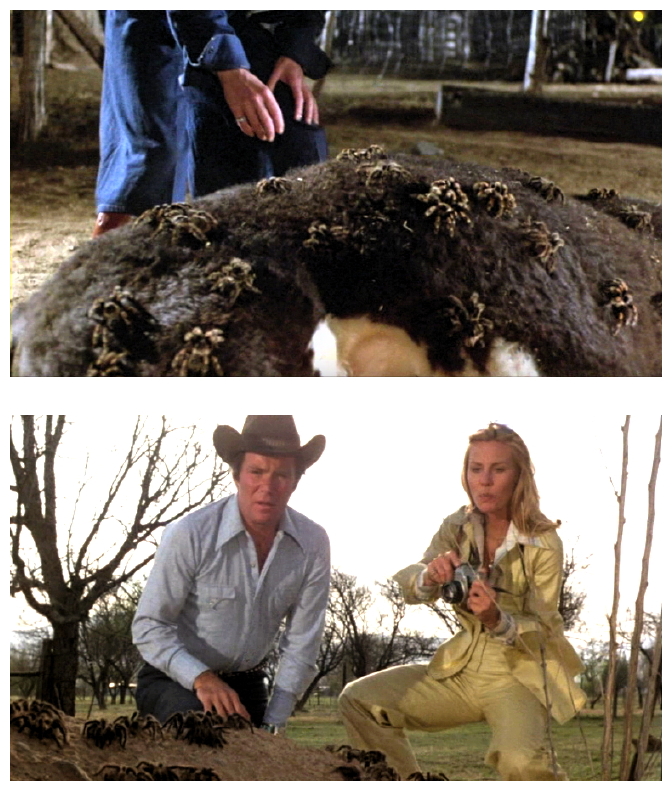 Kingdom Of The Spiders was nominated for Best Horror Film by the Academy Of Science Fiction, Fantasy and Horror Films, but it was beaten up by a little girl…I mean it was beaten by The Little Girl Who Lived Down The Lane (1976) starring young Jodie Foster. At the awards ceremony The Shat performed Elton John‘s Rocket Man in his own distinctive spoken-word style, which quickly became famous for being one of the worst covers of any song ever. It’s with this horrifying ear-worm firmly implanted in your mind I’ll politely ask you to join me again next week as we step up to Hollywood’s all-you-can-eat buffet and fill our plates with public domain potato salad next week for…Horror News! Toodles! 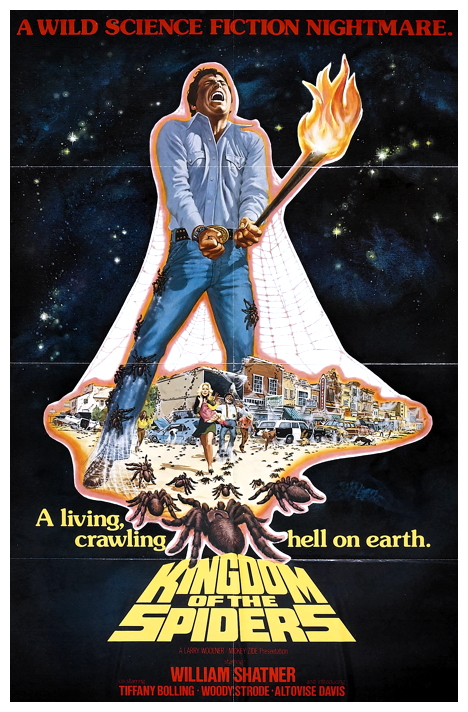