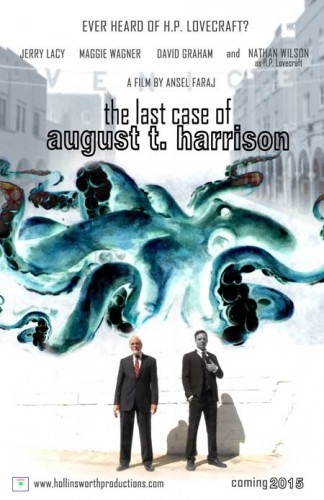 Set in and around Venice Beach, California – August T. Harrison, private eye, comes out of retirement to solve what seems at first to be a bizarre missing persons case, but as he digs deeper, he finds himself caught in the middle of a dark conspiracy involving the writings of H.P. Lovecraft. Are Lovecraft’s tales just fiction? Or do they hold the secrets of the cosmos?

The film is written and directed by Ansel Faraj, director of 2013’s Doctor Mabuse and the 2014 web series Theatre Fantastique. Ansel Faraj, Nathan Wilson, Rosa Taylor-Faraj and Roxie Zelden are the film’s producers. The score is composed by award winning composer Bill Wandel.