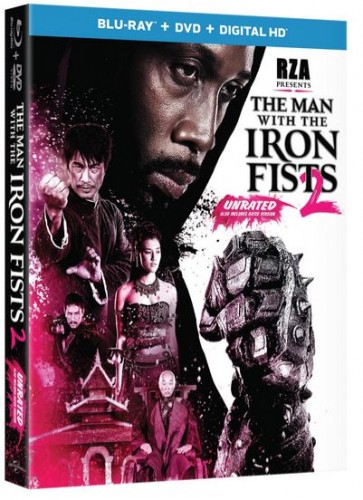 When a stranger, Thaddeus, is found badly wounded near the village, miner Li Kung and his wife Ah Ni offer him refuge. As he heals, he becomes entrenched in a conflict that pits the townsfolk against the evil Master Ho, his nefarious Beetle Clan and the terrifying Lord Pi.

Our main iron fisted character Thaddeus “the blacksmith” (RZA) returns now trying hard to follow in the ways of peace (opting for a more quiet existence than his past years of violence). Reputation proceeding him, Thaddeus now covers his iron fists in gauze to avoid confrontations.

“The Man with the Iron Fists 2” is introduced and set within a small Asian village located in the Wuji mountains. We are given a brief introduction into a legend about a form of ultimate “chi” called the “golden nectar” 9found the mountain’s well).The nectar was abused in the past by a man called Lord Pi who was punished under the command of Abbott and his Gemini Killers.

The nectar is said to grant immortality for whoever drinks from it. Though those who are prepared to protect it are also ready to do so at war. Pi is overthrown and sentenced to a life punishment.
Years later, we arrive at the same village which has been under the hardship of an evil corrupt leader calling himself “Master Ho” (Carl Ng). Master Ho rules the town aided by his cohorts the “Beetle Clan”. He also commands a mining operation that abuses it workers under threat of death or violence (Often killing off workers to set example).

The workers, a simple folk, are forced to endure this hardship (though secretly plotting to overthrow Master Ho). The miners look to the guidance of their boss, LI Kung (Dustin Nguyen). Kung, a peaceful man, prefers to keep things at bay by opting out of any form of retaliation.

The village is additionally run by an older handicapped man named Mayor Zhang (Dustin Nguyen) who “also” answers to Master Ho. Basically ….it’s bad way of life for the miners who wish to fight back but find sudden death when they do so. A town challenge ring gives those the opportunity to challenge Ho to a duel. The fights usually end in a violent death for the challenger who is beaten to death unfairly by one or more of the beetle clan men.

Getting back to the iron fisted Thaddeus, Thaddeus arrives at the village after being attacked out at sea. His skills as a master black smith prove to be very useful to Kung who takes him into his house. Thaddeus is talked into upgrading the miner’s tools as a payback to Kung.

Per the brief plot summary, this film takes more of a traditional direction rooted in a “good vs evil” and “village under duress” scenario. The plot-line follows more of an older-style Asian movie style that mirrors its influences adding its modern dynamic editing flair.

The film directed by Roel Reiné is beautifully shot against the scenic areas of Thailand bringing to the table a solid tale of a legend, a small village and a purpose. Action scenes are tightly shot in this professionally produced epic that reintroduces our franchise character again to the screen. Even as stand alone this film works on its own merits but as a franchise is a great follow-up to the original.

“The Man with the Iron Fists 2” is a great film that will please anY action lover or fan of well-written storylines (written by John Jarrell & RZA). Though I still favor the original as the better of the 2, that statement shouldn’t take away the fact that this is still a fantastic film to watch offering a smattering of good martial arts scenes.

It’s worth noting that the film was edited by the team of Radu Ion and “Chuck Norris”, who add finesse to the film’s fight scenes.