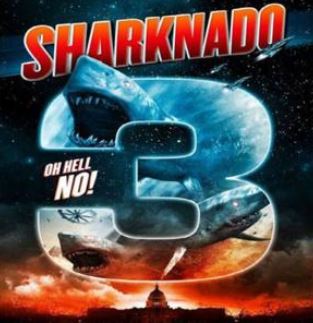 The film will be a no-holds-barred, hands-on look at the making of Sharknado 3 as well as a retrospective celebrating the rise of Sharknado and Sharknado 2: The Second One and how the franchise became a cultural juggernaut. The film will feature new in-depth interviews with cast and filmmakers, as well never-before-seen footage from the set. And it will explore why and how people respond to the films, which is where the fans come in: eligible video submissions will be included in the documentary to illustrate just how rabid Sharknado fans can be.

The official Sharknado companion film will be released by Cinedigm in Summer 2015.  Sharknado 3 will air on Syfy on July 22nd.

All submissions are eligible for inclusion in the official Sharknado film and other media related to Sharknado 3. One first prize winner will also be awarded $250!

You can submit three types of videos:

Please prepare a short clip explaining or showing why you are the biggest Sharknado fan. Show off your original costume, song, dance, video, or work of art. Did your family record your freakout when Sharknado 2 aired on Syfy? Do you have a slideshow of your wild Sharknado viewing party? Do you just need to film yourself explaining why you love it so much? Submit it!

What’s your favorite Sharknado moment? Fin slicing his way out of a Great White? April getting her hand bitten off? Create a short scene (under 2 minutes). The only rule is: you can’t use any human actors on screen! Voices and dogs are okay.

Please prepare your videos in a 16:9 ratio and (if you’re using a smart phone, that means hold it horizontally, not vertically). Send them to contest@theasylum.cc via Hightail, Dropbox, or other safe file-sharing service along with an email containing your name, contact email, and mailing address. Do not attach full, uncompressed videos to an email.

You may also mail your submissions on a disc or drive to The Asylum. However, we cannot return physical submissions, discs, or drives. Mail submissions to:

By submitting, entrants grant The Asylum permission to include their submission in the Sharknado 3 documentary and in any other media. Read complete submission rules here. Entries that fail to adhere to these rules will not be considered.