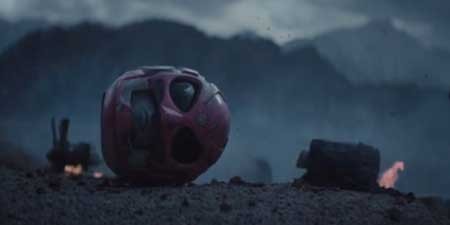 Deboot of the Power Rangers. My take on the FAN FILM. Not a pilot, not a series, not for profit, strictly for exhibition. This is a bootleg experiment not affiliated or endorsed by Saban Entertainment or Lionsgate nor is it selling any product. I claim no rights to any of the characters (don’t send me any money, not kickstarted, this film is free). This is the NSFW version. An alternate safe version is on youtube.

Everyone has heard about it by now….The Power Rangers NSFW fan film that was recently deleted from Vimeo due to copyright claim from Saban Productions, but at the time of this writing is still available for view on Youtube.

Saban is talking lawsuit against the filmmaker, and chances are it will disappear very soon, and if you haven’t seen it yet I recommend you get to Youtube RIGHT FRICKIN NOW and look it up. Because you will be really pissed off at yourself for missing it.

Power/Rangers is produced by Adi Shankar (Dredd, 2012) and written by Joseph Kahn (music video director,who has worked with Britany Spears, Eminem, Bink 182, and others). The score for this short was created by Brain & Melissa, which is made up of Bryan Mantia and Melissa Reese. You may know Bryan as an amazing drummer who has worked with the likes of Primus, Tom Waits, Guns N’ Roses, Praxis, Bootsy Collins, producer Bill Laswell and guitarist Buckethead to name a few. Melissa Reese has composed and performed for music for several video game companies, including Sony Playstation,. XBox, and Disney Interactive.

So here’s the story….

Set about ten years or so after the events of the tv series, this fan film follows what happens to these super powered teens after the cameras stop rolling. We find ourselves in a dystopian future where an alien menace known as The Machine Empire has taken over the planet. Most of the Rangers are dead, from one thing or another. Everything from assassination to drug overdose to suicide.

Our story opens with the the pink Ranger, Kimmie (played by Katee Sackhoff from Battlestar Galactica) in an interogation room. She is faced with former Ranger pal Rocky (James Van Der Beek), who has turned to the Dark Side and works for the aliens. The point of this conversation is to determine the wherabouts of Tommy, the former green ranger (Russ Bain), who has managed to stay under the radar all this time.

What would a Power Rangers fan film be without epic battles? Well, there’s no disappointment here. Fight coordinator Don Thai Theerathada has worked on Pirates of the Carribean, The Expendables, and The Wolverine, just to scratch the surface. He really brings his “A” game to this production. If the original show had looked like this, I might have watched it more.

I was never a Power Rangers fan, so there are a few references to the original series and characters that are lost on me. I did catch a few, though. And without giving anything away, let me assure you that one of the original actors from the series does appear in the film. I’m sure you’ll have no problem recognizing them when you see them.

Seriously….GO WATCH THIS THING WHILE YOU STILL CAN. You won’t regret it.

Using my special “short scale” of one to five, five being awesome, I’m totally giving this film 5 Zords.