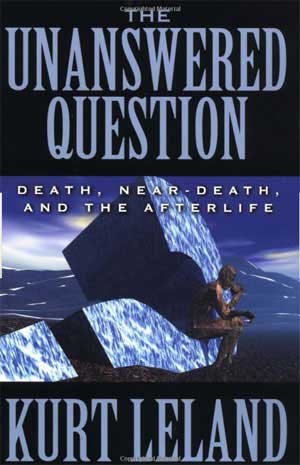 THE UNANSWERED QUESTION: DEATH, NEAR-DEATH, AND THE AFTERLIFE (PAPERBACK)

While I must admit that “The Unanswered Question” is actually my first book read on the subject of afterlife,…. it’s my opinion even without reading the others that it has to be one of the better ones. I say this because rarely does a book infuse new perspectives on life to me, or death for that matter. The Unanswered Question is presented in such away that whatever doubts I may have had have now been re-examined though the knowledge of reading. Author Kurt Leland does an interesting thing. He approaches the subjects of Death, After life and Near death experiences from almost a third person point of view.

This way he is not merely influencing us by opinions and his own ideas but using his experiences, research and reports of NDE’s to educated us on similarities, occurrences and his findings as a frequent astral traveler or out of body expert. Now I know that statement seems a bit far-fetched itself. However Leland reports to us that he has acquired and achieved this ability over many years of using it or experiencing it. This fact is only compared to what he has found in research elsewhere. It is then aligned to statements and reports that match his experience and a few that don’t. I really like this take and approach. It feels more true and less airy metaphysical than what we tend to read in more sensationalistic books.

What intrigues me the most are the details and descriptions as we are privy to read. His detailed accounts on the “other world” and the facilitators are beyond fascinating. Like something out of a science fiction film. The book itself is enormous in it’s coverage. As you’ll find Kurt takes on many subjects of intrigue and paints pictures along the way. Locations in the beyond are described through other accounts as well as his own. While some claim structures as translucent bricks and great libraries of information it all translates into more or less forms of energy. Indescribable but yet filled with metaphors that help to bring some kind of visual sense to it for print. We are also introduced to a number of after life acquaintenaces. Some of these come in the form of spiritual guides, while others take on forms of more indistinct featureless beings. A new term such as celestial eyes is introduced which details the beings of the physical and non physical realm. Beings who possesses abilities to see into multiple realms, futures, past and relations.

We are told about the silver cord which connects are real self with our celestial self. The connection and implications its suggests to the beyond. We are also explained a bit about the heaven and hells reports brought back. While many religious fundamentalists would argue points on faith and experience, the main message is that nothing is really set in stone in this realm. What might come as a hell experience could translate into personal visions that the traveler has brought with them.

There is a balance between the undescribable and the minds willingness to connect certain experiences with images. While alot of what is spoken about sounds vague, its done in a way that you are given information to connect the dots into a personal evaluation on what is behind the great mystery. I do like the fact that Leland reports many times as a 3rd person observer, collecting reports, commenting on them and leaving parts open to interpretation. This is what makes this book so important. Many chapters devote themselves to the overview of after death. Leland chose to cover as many of these cultural differences and religious experiences as possible. when it all comes down to it, the after life is presented as a pure energy state that the spirit and surroundings are fueled from. Even at the unexceptance of science and its community, the experience prevails the enigma of its truth in unprovable form.

Near Death Experiences are used though out most of the research. The Tibetan & Egyptian Books of the are explained and how it correlates. While the actual books may require further investigation they are also used as reference many times. As a reader, I found that I was less engaged in this aspect of afterlife. While its taken from old books and cultures, one of the pertinent messages in this book is that some areas will appear different that others based on who you are your upbringing and beliefs. Taking that into consideration it seems less likely that I would find myself emerged in after life Egyptian lore. Though a plus to this book is that it covers “alot”. Whatever you take away is a step towards new enlightenment.

Well if you couldn’t tell from my excitement in the rush of new ideas presented through “The Unanswered Question”, then I will back it up with the statement that this is a fine intelligent book that lays things out in a readable manner. No, worries on concepts like Deepak Chopra might write that go overhead. The facts, the fiction and the mystery is laid out in points and pieces. I recommend it not because its a good book, but because its also an important book. Whether you read it now or in 10 years, the information is still relevant as a opportunity for spiritual expansion. In retrospect, $16 to receive 520 pages of information that could change your life is a drop in the bucket for what its really worth!