Home | THE DIVINE MOVIE Most Brutal and Bloody Action Movies in Recent Years?

THE DIVINE MOVIE Most Brutal and Bloody Action Movies in Recent Years? 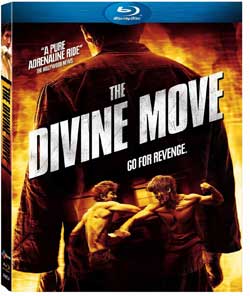 The Divine Move, delves deep into the seedy world of underground GO (baduk) gambling rings and one ex-professional player’s deep desire to avenge the murder of his brother for which he was framed and sent to prison. CJ Entertainment releases this smart, jaw-dropping action film on DVD and Blu-ray March 17, 2015. This title will retail for $26.98 SRP (DVD) and $29.98 SRP (Blu-ray). Bonus features including Making of The Divine Move and The Divine Move movie trailer are available on Blu-ray.

Tae-seok, played by JUNG Woo-sung (The Good, The Bad and the Weird), is an ex-professional baduk player and a fairly good gambler who likes high-stakes games. When Tae-seok’s brother gambles his life away in a high stakes game of Go, Tae-seok is wrongfully accused of his murder and sent to prison after he is humiliated and defeated in a gambling game by an underground kingpin, Sal-soo, played by LEE Beom-soo (Over My Dead Body, Lifting Kingkong). Fighting for his life and yearning to avenge his brother’s death, Tae-seok spends several years in jail training non-stop to battle against anyone in the gambling world who stands in the way. When Tae-seok is released from prison, he gathers the best master players of GO to prepare the biggest play for revenge.

The Divine Move drips with non-stop action from the moment it starts to the closing credits. One of the most brutal and bloody action movies in recent years, The Divine Move showcases the results of countless hours of training that action movie masters JUNG Woo-­sung, LEE Beom-­soo, and newcomer CHOI Jin-hyuk invested in the making of the film. According to Director JO Bum-gu, he aimed “to expand the limit of action spectacles of Korean cinema.”

The Divine Move is presented, produced and presented by Showbox and Mediaplex, and distributed by CJ Entertainment