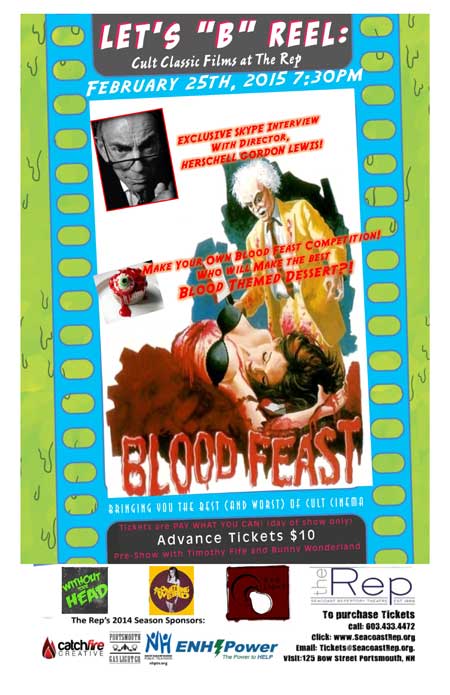 Have You Ever Had An Egyptian Feast? The Rep and Let’s “B” Reel  Present “Blood Feast” with Director Herschell Gordon Lewis

Portsmouth, NH – Seacoast Repertory Theatre and Let’s “B” Reel are proud to continue their award winning Red Light series with a screening of the cult classic “Blood Feast” on February 25th, 2015 at 7:30pm with an exclusive skype interview with the legendary director Herschell Gordon Lewis. In addition to the screening there will a “Make Your Own Blood Feast” competition with audience members bringing their own bloody and sweetly edible homages to the film.

“Herschell Gordon Lewis is an inspiration to the films that we show here at the Let’s “B” Reel and it is an honor to have him interviewed at this screening” says Timothy Fife, co-curator of the series. Among horror films, Blood Feast is one of the classics and the first to be categorized as a “gore film.”  Without this film it would be hard to image a “Friday the 13th” or many of the horror films we know today.  The film is one of the favorites of cult director John Waters, who famously touted the movie as “the Citizen Kane of gore films.”

“With a month full of love notes and bleeding hearts, we thought Blood Feast was a good juxtaposition for Let’s “B” Reel” sa’s Knate Higgins, special series curator for The Rep. “Im excited to see what people make for our (food) competition…It’s always hilarious watching us sample each and every entry, that’s worth the ticket price alone!”

Let’s “B” Reel presents Blood Feast runs one night only February 25th at 7:30pm. Bar is open at 7:00pm. Advance tickets are $10, and day of show tickets are pay what you want. Seating is limited and due to high demand, advance purchase is recommended. Tickets may be purchased online at www.seacoastrep.org, in person at 125 Bow Street Portsmouth, NH 03801, or over the phone at 603.433.4472.