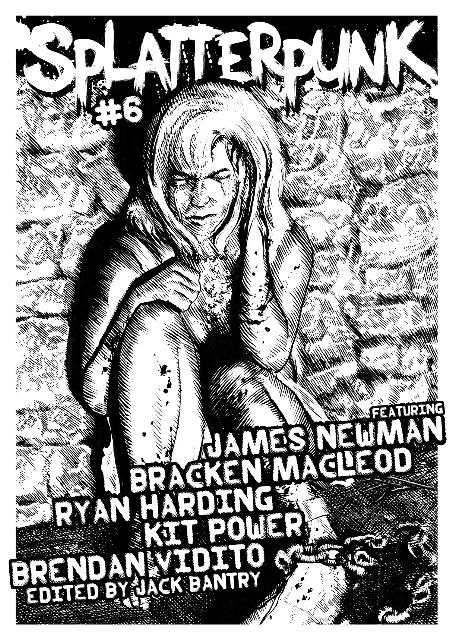 I’ve raved on and on about how much I love the DIY aspect of Jack Bantry’s Splatterpunk zine. Twice now, in fact, in my reviews of issues 4 and 5. So I’m not going to repeat myself again by going into all that about how it feels punk, and how it’s so good to see paper zines still exist, etc, etc, etc. You already know my feelings. Instead, I’ll say that issue 6 brings more of what you’ve come to expect from these guys, this time with some new voices and some new features.

Right up front is a dedication to J. F. Gonzalez, most notably the author of the Clickers series and Survivor, as well as over a dozen others, who recently passed away. Bantry says a few words about his influence on the genre and dedicates the issue to him. Then we ease us in to the horror of it all with a little non-fiction. Bantry gives a list of best “splatter fiction” books to check out. Kit Power talks about how he might be squeamish, but horror fiction written with heart keeps bringing him back. James Newman gives a great list of top unsettling moments from movies that aren’t considered horror movies. And finally, John Boden (of horror zine Shock Totem fame) talks about some of the things that drew him into the horror world from an early age. These non-fiction columns are always fun, letting the reader get to know a little better some of the folks who are about to make them lose their lunch.

This issue has five stories by five different authors, and each story comes along with an illustration. The first story pairs relative newcomer, Brendan Vidito, with artist Nick Gucker for a story called “F*ck Shock.” The medical definition of f*ck shock is the chronic dissatisfaction with sex after having the most satisfying sex of your life. What is main character Robert’s version of this “most satisfying” experience? It involves an underground sex club, spidery creatures reminiscent of Wicked City, worms, and venom. And it wrecks him just as much as it wakes him up to a whole new world.

James Newman is another author I was previously unfamiliar with, but it turns out he’s got a lot of work out there, novels such as Ugly as Sin, The Wicked, and Animosity, just to name a few. Here, he brings us “Big Girls Help Their Mommy,” a story told from the perspective of a four year old girl. It’s a haunting story of what can happen when a child is raised in an angry, disconnected household. Her dad is a jerk who left his family for another woman, her mom is angry and stressed out, her baby brother is always crying, and she decides to help out in what seems to her the best way she can. Luke Spooner adds a bit of the innocence that will soon be lost with his artwork to the story.

“The Texas Chainsaw Breakfast Club, or I Don’t Like Mondays,” by Bracken MacLeod (author of Mountain Home and White Knight), is probably exactly what you think it is. Take the idea of the characters from The Breakfast Club, throw them in a torture dungeon reminiscent of something Leatherface might have if he was well-off and lived in suburbia, and you’re on your way to where this brutal and funny story wants to take you. MacLeod knows his stuff, and he manages to paint vivid pictures of these high-school stereotypes, vivid enough to not make you picture Molly Ringwald and company, and then he destroys them, both emotionally and physically. Dan Henk painted his own picture of the story, and it also graces the cover of the issue. This is fun stuff.

After a handful of horror book reviews, we close off the sixth issue of Splatterpunk with a short one by Kit Power, author of Lifeline and columnist at Gingernutsofhorror.com. You’ll remember this one the next few times you head to the bathroom at work. Richard is kind of a jerk. He doesn’t think so, of course, but his behavior says otherwise. After disrespecting a female co-worker on his way to the restroom (the message of this entire issue seems to be stop being bad to women), he runs into a bit of trouble. Actually, a lot of trouble, and of the gastro-intestinal variety. This story is nasty in so many ways, and just as Power promises in his earlier column, it makes you want to call b.s. on his squeamish claims. Jim Agpalza’s depiction of Richard’s problems is spot on and memorable.

As always, a lot of great stuff crammed into just forty pages. I’ve said it before, I’ll no doubt say it again: Bantry is providing a great time for fans of horror fiction. If you haven’t jumped on this viscera-covered bandwagon, what are you waiting for? These are limited edition zines, and once they sell out, they’re gone. And by the looks of it, ALL of the previous issues have sold out. Get on this, my friends, you won’t be sorry. 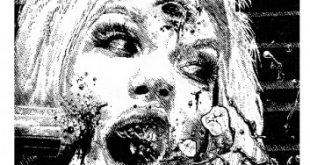 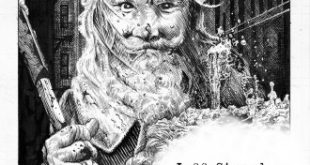