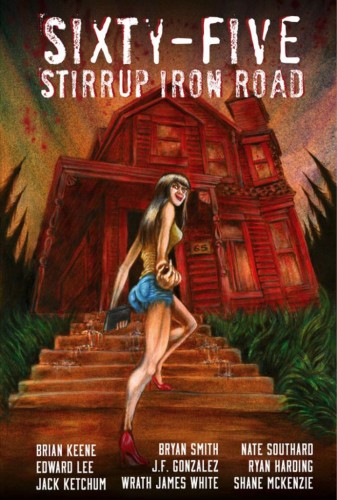 First things first, Sixty-Five Stirrup Iron Road is bigger than your average horror novel. When fellow author Tom Piccirilli (four time Bram Stoker award winner, author of The Last Kind Words, A Choir of Ill Children, etc…) ran into health problems and subsequent medical bills, some friends decided to lend a hand. And what better way to raise money than write a book and donate the profits to the cause? So, what we have here is a nine-man batting order of splatter all-stars working individually as well as collaboratively to put together one sick story. Edward Lee, Jack Ketchum, Brian Keene, Bryan Smith, J. F. Gonzalez, Wrath James White, Nate Southard, Ryan Harding, and Shane McKenzie, some of the top names in extreme horror fiction, have all stepped up to the plate for a struggling cohort while bringing us the blood, gore, sex, and violence we’ve come to know and love. This collaborative effort was first put out in hardcover form by Sinister Grin Press, then paperback and ebook by Deadite Press, and then a German translation in ebook and hardcover by Festa Verlag, all of which put the proceeds toward Mr. Piccirilli’s bills. Just the kind of project I love…

Enough backstory, there is still a novel to talk about here. Sixty-Five Stirrup Iron Road is equal parts haunted house, splatterpunk, perverted sex, and hardcore gore, with a side of slasher tendencies and more than a handful of surprises along the way. And it all starts when a couple moves into what seems like might be their dream home. Well, technically it starts ten years before that, with a part-time prostitute, Nicci, who gets caught with her roommate’s boyfriend and has to move in with her brother. All hell breaks loose when she suspects he may done something somewhat, er, dirty to her while she was asleep. When she goes to confront him, she finds his computer playing videos that make her want to throw up; bestiality, scaterotica, Roman showers, and more. Her brother swears it must be a computer virus, and also swears that he didn’t do the nasty thing she accused him of doing to her, and eventually Nicci lets it go. But the next night, she wakes to feel herself being violated. But by whom? There is no one there. When she is able to get free, she runs to her brother, but slips and falls on his torn apart, splattered body. And where does this all take place? The house at 65 Stirrup Iron Road.

When Arrianne and Chuck move into the same house ten years later, they have no idea that anything bad has ever happened there, much less the slightest notion that their lives are about to be turned upside-down. But they do recognize that a) there seem to be chipmunks in their attic, and b) their sex life has never been more intense. Then a strange smell appears in the house, followed by vile, disturbing p*rn popping up on Chuck’s computer. What follows is a string of killings and out-there perverted sex that would impress even Joe D’Amato or Caligula.

There are so many fun things about Sixty-Five Stirrup Iron Road. Yes, I said fun things. Each chapter is written by a different author, usually followed up by a chapter shared by two authors. For example, chapter seven is by Jack Ketchum, then chapter eight is a collaboration between Ketchum and Shane McKenzie, and so on. And it works out really well. There aren’t clunky transitions between writing styles or big gaps in story, as could happen, but rather a seamless story from beginning to end. Although, without giving spoilers, I will say this…as we reach the end, we realize there are more characters involved in the story than we first were led to believe. Somewhere around NINE more, to be a little more specific. But like I said, this book is a lot of fun to read.

It is also absolutely disgusting. It is perverted, and bloody, and vile, and you will love every page of it if that is what you like. I’ve actually read reviews of this book by people who say they are fans of one or more of the contributing authors, and they complain that it is gross. So I’ll say this: if you’ve read anything by any of these authors, you know what to expect, right? Well, take that, and multiply it by nine sick, sick horror writers, and you’ve got Sixty-Five Stirrup Iron Road. After all, these are the authors that brought us such titles as The Girl Next Door, Muerte Con Carne, Genital Grinder, Header, Succulent Prey, and The Rising, among many, many other blood and gore masterpieces. Readers shouldn’t be going in expecting a young adult title here, but they can expect to have a good, nauseating time. The fact that the proceeds go to a great cause just makes it that much better. 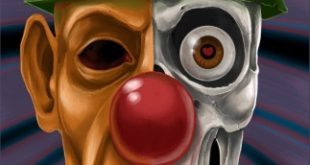