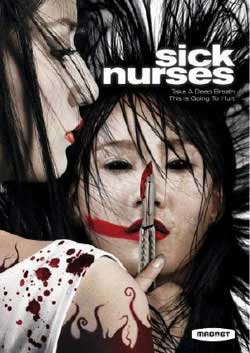 Six nubile nurses and a devious doctor are brutally slain one after another by a vengeful spirit in this bloody shocker. The group had been illegally harvesting body parts for sale on the black market until pretty Tahwan threatened to squeal to the law. Not about to give up their lucrative scheme, her co-workers put her on the table for carving. But a week later, her dying curse comes true as her corpse rises from the grave to take its revenge.

Before I begin, Sick Nurses was one of those films, I tried watching one night, fell asleep and woke up not knowing what the film was about. It seemed hard at first to make sense of …so like the trooper I am, I set out to make the attempt the very next night. Word of advice…read the review and then watch the film.

This 2nd viewing…it started to come together. It helped though to understand a bit about the back-story, so the present didn’t seem like a nonsensical nightmare. Sick Nurses is a film about a hospital where they sell dead bodies for money. The parts are harvested to black market dealers under the order of a doctor and his 6 nurses. The nurses all seem to live there or at least share the same quarters as they prepare for work hours. There latest body has been there longer than 7 days, which according to legend is the length of time it takes for a vengeful corpse to rise from the grave and seek revenge. It all sounds pretty chilling but for some reason those facts weren’t obvious from the get go. Per flashback we see that the flighty nurses killed a co-worker that threatened to squeal and so the haunting ghost lady is on the warpath. These simple facts, can pass you by pretty easily if not paying attention.

Now in typical Asia horror fashion we are subjected to a number of creepiness moments. Things like hands appearing in the background, ghosts popping up, hair strangling, ghosts on the ceilings… that sort of thing. Though I do have to say the creep factor was pretty high and the death scenarios were inventive. The ghost of Tamara, who has come back in spades painted black head to toe (a refresher to the all white asian ghost redundancies) has the power to kill, cause hallucinations and twist the fabric of reality a bit to suit her vengeance streak. This bit of info is important to know so you don’t think your simply sharing some of the nurses dreams or for that matter have lost your mind. The objective? To kill all the nurses who killed her. My first thought when seeing her was she looks alot like Mystique from the x-men. Combine that with the grudge ghost and you have a match.

The executions are carried out a bit like Freddy Krueger for Nightmare on Elm street style. There is a relation with the deaths to fit the individuals. For instance, the twins are subjected to sawing the other into pieces. The glamour wannabe gets a purse stitched to her head complete with the seams that keeps it attached. The bolemic ands up losing her jaw and being force-fed a fetus. Great stuff indeed…and there’s more to follow.

The doctor who is at the center of all the nurses is actually a closet gay man who’s lover has become a women surgically so they can marry. It’s a pretty messed up bunch if you ask me and still a few things left me scratching my head. I did enjoy the haunts which once in a while used forced perspective to twist the camera views on the viewer. I also enjoyed the mix of camera moves they used from time to time to add to the spookiness. In my reviews and Asian film watching, the one thing that’s hard to get used to is the absence of essential info at the films start. I’ve found that answers do come, though its a bit different than the US way of doing things, so it seems lost at times when your trying to find the rhythm of the film.

Sick Nurses was pretty decent. It had parts that lost me at times but made up for it with cool spooks and righteous kills. My recommendation really on this film is read this review first and you’ll get the gist from the get go rather than scratching you head through the first half. Though the film is created towards the horror end viewers, so give it it’s chance and it will entertain quite well.