From the depths of Hell she has been reborn.  Satrinah Morte is Madam Satan. Sent to our world by her Master, she is tasked with the harvesting of souls in order to secure his place as Enslaver of the World. One man stands in her way: Detective DuMonde. 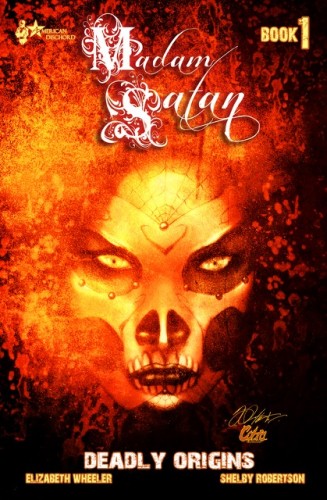 Michael DuMonde has spent a lifetime trying to dull the nightmares plaguing him every night. After being called to the scene of a brutal murder at the hands of Satrinah he is sucked into the mysterious Order of Gaia and comes to realize his true purpose. As Madam seduces the souls out of men in Los Angeles, Michael will have to face an abattoir of horrors on his mission to send her back to where she belongs before can summon Hell to the City of Angels.  Filled to the teeth with demons, fallen angels, and mystery, this graphic novel promises to be the start of a deeply twisted adventure.
Drawn and colored by established artist, Shelby Robertson with Elizabeth Wheeler making her writing debut, Satrinah Morte is resurrected from Hell as Madam Satan!
After the successful launch and funding of a Kickstarter campaign in early 2014 for his self-published book ’94, a tale about time traveling mercenaries sent back to the past to stop an absurd future, Shelby decided to flex his artistic muscles and take on one of the biggest projects of his career. While ’94 was a throw-back to everything we claim to hate about 90s comics (but secretly love), Madam Satan: Deadly Origins is a detailed, fresh take on a Golden Age character. In a career spanning over 20 years, Madam Satan: Deadly Origins will be the first book both fully drawn and colored by Shelby Robertson.
The Kickstarter for Madam Satan: Deadly Origins will include a number of limited edition covers including a metal cover as-well-as metal trading cards from industry professionals including Skylar Patridge and Tyler Kirkam. 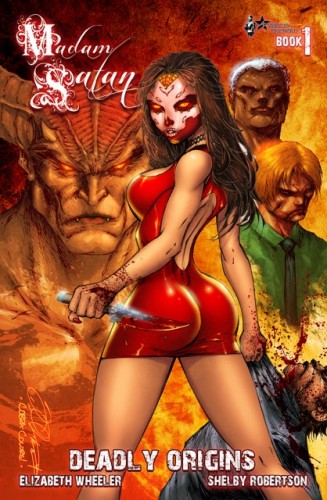 You can view the current live Kickstarter for Madam Satan: Deadly Origins at kck.st/1ulytWN or at www.AmericanDischord.com
Shelby Robertson is an American comic book artist. Getting his start in the early 90’s at Image in Extreme Studios, he went on to work with a variety of publishers including Maximum Press, London Knight Studios, Malibu and Verotik on titles such as Spawn, Crypt, Avengelyne, Black Flag, and Spiderman Prime. Shelby has also published a number of creator owned stories such as Latex Alice, Fem 5, and Darkshrine
Share