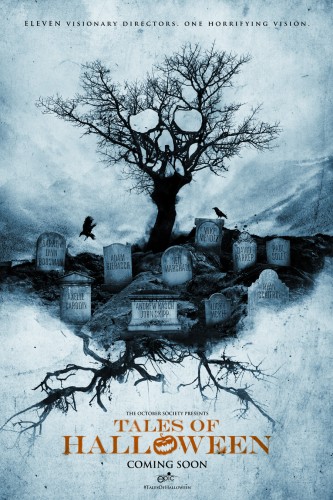 “In Tales of Halloween, every role is filled with iconic figures like John Landis and Stuart Gordon,” said Epic Pictures Co-Founder Shaked Berenson. “It’s a big bloody love letter made by horror fans for horror fans.”

Tales of Halloween will showcase the following ten short stories:

“THE WEAK AND THE WICKED” Directed by Paul Solet

“THE RANSOM OF RUSTY REX” Directed by Ryan Schifrin

“THIS MEANS WAR” Directed by Andrew Kasch and John Skipp

The ten stories will be woven together by their shared theme of Halloween night in an American suburb, where ghouls, imps, aliens and ax murderers appear for one night only to terrorize unsuspecting residents.

The directors have created a manifesto with rules to create their films based on the values of Halloween night. The antithesis of the Dogme 95 manifesto, the directors will not be frugal with special effects, props and musical score, and have already attracted notable talent in the horror genre, such as composers Frank Ilfman (Big Bad Wolves) and Joseph Bishara (The Conjuring).

Axelle Carolyn created the concept and brought the filmmakers together for this unique production. Tales of Halloween is being produced by Patrick Ewald and Shaked Berenson of Epic Pictures Group along with Mike Mendez and Axelle Carolyn.