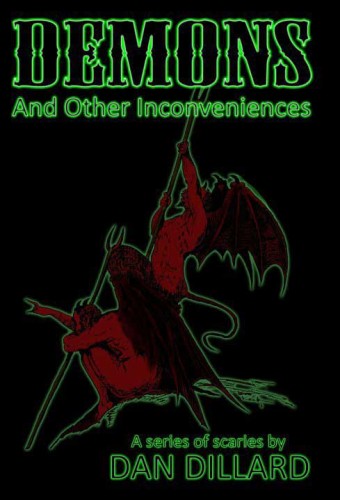 I thought that Dan Dillard’s Demons and Other Inconveniences had grabbed me from the very title. After all, who wouldn’t want to read a collection of short stories by a man who has the stones to reduce the minions of Hell itself to mere inconveniences with a tongue-in-cheek swipe of the pen? But I hadn’t really been grabbed yet, just beckoned; merely teased with a long, scaly claw.

I again thought the book grabbed me when I read the first tale, “Rolling Meadows,” in which death and myth converge in an assisted living facility, but still, my interest was merely being tickled by that demonic digit.

When the book really grabbed me, I knew it. It was with the first sentence of the second story, a creepy, atmospheric gem called “The Pig Man.” When I read “Mommy, who is the pig man?” that demon fist seized me for sure, and boy did it squeeze! This proved to be my favorite story in the entire collection. Dillard builds a steadily more intense sense of suspense until the gruesome conclusion kicks us in the teeth, but it is not in the climax of the story that its impact is most keenly felt. Its true effectiveness is in the sense of something being just not quite right. Most horror stories are so distant from our everyday experience as to provide an automatic buffer between the reader and the terror experienced by the protagonist. But here, Dillard explores the sort of fear that every reader has had at one point or another: that tingly, creeping feeling that something you can’t put your finger on is off, is skewed, is ineffably wrong. And the situation in the tale, that of a desperate mother left alone with her daughter, magnifies the horror, seen as it is not only through the lens of self-preservation, but of protection of a child.

Which brings us to the most controversial element of this entire collection. You can’t get too attached to any of the characters. Not even the kids. So … that sense of security you have when you’re watching a horror movie and the child is in danger, but you just know they’re not going to kill a little kid? You know the feeling I mean. Kiss it goodbye as soon as you pick up this book, because everyone is fair game. In my opinion, this significantly ramps up the creep factor, as well as the authenticity. After all, if demons, bad guys, and strange old ladies who aren’t what they seem were really running amok in your neighborhood, how likely is it that they’d spare the little ones just because they’re sweet and innocent? Personally, I suspect the youngsters would be the first ones to go, appetizer-sized as they are.
Though he delivers abundant chills, Dillard tempers the horror with a healthy dose of humor. “Unlucky in Death” is an amusing offering about the myriad trials of “life” as a vampire with a fear of blood. “Never Judge a Book” presents a very funny twist on conventional perceptions of … ah, but that would be telling!

The fact that Dillard returns again and again to certain themes that run throughout the stories hints that he is letting us in on his personal nightmares (OK, you caught me, he says so on the About the Author page too). But read some of these tales before bed, and you may find that you’ve let him into your nightmares too.