Five days in the lives of an exorcist (Eloy Palma) and his granddaughter (Alba), working in the Barcelona area.

Swiftly becoming oversaturated as of late, the exorcism film is threatening to encroach upon slasher and zombie territories.  Though a nearly impossible feat to reach the sheer amount of entries both subgenres have achieved, it remains a daunting task to stifle a sigh of indifference when yet another crops up. A spell further down the road, and that sigh could very well evolve into “Enough already!” Truth be told, it did for this critic with the unwarranted success of “The Last Exorcism” five years back.

Following the earlier 2014 release of Ti West’s arguably excellent “The Sacrament,” writer/director Marc Carreté employs his own slow burn style with “Asmodexia.” Concerning preacher Eloy (Lluís Marco) and granddaughter Alba (Clàudia Pons), our latest details their final days before a heavily foreshadowed “resurrection” on the not-so-fateful December 21, 2012. Ignoring that no such apocalypse scenario occurred (my favorite batshit theory being Earth’s collision with the planetoid Nibiru), this freshman feature from the budding talent unfolds his doomsday drama with the intimacy of a whispered secret.

It’s only when the scope is expanded beyond the two primary players and their dark sojourn across a sometimes breathtaking Mexican landscape that “Asmodexia” flounders, at times painfully so. Eloy and the sickly, gifted (or perhaps cursed) Alba are two inscrutable characters, their conversations along the way to supposed oblivion opaque to a near fault. However, Marco and Pons pull off the impenetrable duo with aplomb, forcing us to care although we’re uncertain why or if we even should.

Fear not, friends. This isn’t all a bunch of blah-blah (though there is plenty of that) about Christ’s sacrifice and the meanings of names. As they traverse, the world around Eloy and Alba grows increasingly bleak, erratic and violent behavior attributed to demonic possession spreading out around them like a plague. Performing exorcisms which momentarily reunite them with past members of a religious sect Eloy led, sparse morsels of exposition are rationed out. We’re also introduced to former follower Ona (an equally impressive Irene Montalà), now confined to a mental facility where the inmates have taken over, murdering any staff members desperate enough for a paycheck to stay on the clock. She holds the key to whatever the hell is going on, and the institution is the final stop on the journey.

Ona’s story, though affording no true insights (except for the whole resurrection deal that everyone yaps about anyway) until the conclusion, provides the thrills that the exorcism scenes can’t quite attain. A final layover at a gas station begins with intensity but approaches silliness in the payoff. The standard makeup, body writhing and yelling in Latin ensue in these moments, yet one stands out as a highlight for location alone. Turns out, the candlelit basement of an abandoned water park proves to be aesthetically more terrifying than anything the French catacombs had to offer in “As Above, So Below.” Who knew?

Lackluster instances aren’t the only issues “Asmodexia” suffers from. The script (co-written by Mike Hostench) struggles to maintain its full-length runtime, even at a brief 80 minutes. A subplot involving Ona’s detective sister Diana (Marta Belmonte) clues us in to nothing as it rolls out a woodenly performed police procedural resembling a sort of “Law & Order: Spanish Victims Unit” episode. Her inclusion also results in the most pointless twist of an already overwrought finale that buries itself under piles of obvious context. I thought we’d moved past the Shyamalan ways of spelling everything out like we’re children. Still, it’s a mesmerizing sequence regardless, and the big reveal is a corker despite the fact that a keen ear (or eye, for those requiring subtitles) could have previously connected the dots.

The true stars of the show are Carreté and cinematographer Xavi Garriga, who present a beautifully muted tapestry that itself is worth the price of admission. This is one marvelous looking motion picture, the vast plains and blue skies contrasting with ominous interiors much like the meandering art house gems of the 1970’s. Aided by another skillful throwback to simpler times in Jordi Dalmau’s sparse score, “Asmodexia” is possibly the most technically impressive independent debut yours truly has witnessed this year. My only hesitation in awarding top honor is in lieu of a rushed, awkward car accident that is thankfully relegated to the background. A full demotion to out-of-frame status would’ve likely been a wiser decision.

Uneven but never short of compelling, this definitely won’t appeal to all. Hell, I have friends for whom it isn’t even a consideration, as they refuse to watch movies that involve any reading comprehension beyond the opening credits. That’s a crying shame, because they’re missing out on a cross-section of modern horror film makers (this applies to all genres, really) who are creating some of the boldest pieces out there today.

Carreté has placed himself amongst their elite ranks with “Asmodexia.” He’s landed far from knocking it out of the park his first time out, but damned if he didn’t swing for the fences and connect. 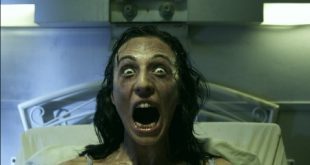 Get Creeped Out By The Trailer For ASOMDEXIA