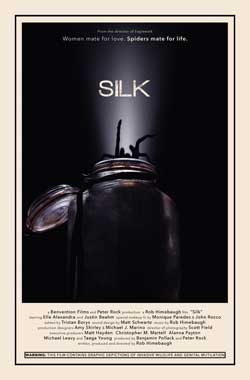 After acquiring a jar of rare silk from the vast desert expanse of Afghanistan, a CIA field operative becomes impregnated by the desert spider hidden inside, and later gives birth to a brood of hungry spiderlings that eat her alive.

A couple in Afghanistan are trying to make a deal with a local who gives them a jar of spider silk and tells them that this is rare silk from the deadliest spider in the world and it will fetch well over one million dollars.

Back at their home, we get the idea that their job is putting stress on their relationship and the guy decides that they will sell the silk and go away somewhere and leave their jobs behind. With that being said they fall asleep and unknowingly leave the jar of silk open. While they slumber a large spider crawls out of the jar and is drawn to the woman and crawls up into her holiest of holies. She wakes with a start and feels below and brings back blood on her fingers.

Things proceed to go downhill from there. The woman begins to get more and more ill while her boyfriend goes off to sell the silk. The buyer goes off screen then comes back and demands to know where the “specimen” is. Truly not knowing anything about the missing spider, the guy begs them to believe him. They put a bag over his head and kill him.

The woman now completely looking horribly sick, is on the toilet when she, once again reaches down below and brings back what looks like bloody webbing. She falls to the floor and “gives birth” to hundreds of small spiders. Screaming in terror and crawling across the floor she looks down and see the giant spider on her chest rearing up. The end.

Coming in at just over twelve minutes, Silk seems to have had a pretty good budget for a short film. The acting was pretty good and they used a real spider for the big on (a Rose-haired Tarantula) but the baby spiders looked like they were just added post filming and not real looking at all. I did like the story however, and while the story does feel complete, I would have liked to seen more just out of curiosity. Good short and for the topic and result, pretty darn creepy.