While an upper class lives well on a lush moon booming with advanced luxury the less fortunate scratch out a living by whatever means necessary on the “Wasteland”. This toxic wreck of a planet is the backdrop for the “Tales from the Desert” feature film. A series of intertwined stories that have a familiar western theme despite the alien world setting. Director/Writer Kevin Buchholz and his Gray Day Films has entered into association with DJ Perry’s Collective Development Inc. to produce this unique feature film. 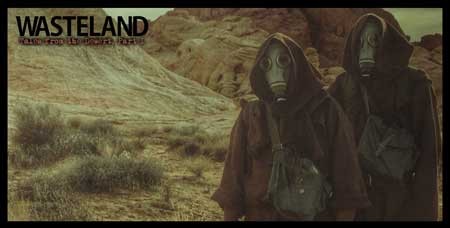 “Wasteland: Tales from the Desert Part 1” finished principal photography in December 2014 in the Valley of Fire State Park in Nevada. The first story involves a pair of criminal henchmen (DJ Perry “Judges” & Nicholas X. Parsons “Pain & Gain”) seeking a mysterious object in the vast desert wasteland. Their tale becomes further complicated with the involvement of another pair of characters played by actors David Gries (“The Lost Within”) and Damian Maffei (“Ghost Lake”).  What happens when these equally dangerous individuals meet kicks off the rest of the film’s events.

The first part now in post-production is releasing some of the 1st stills as the new website and Face book site go active. Look for much more information on this exciting project including casting opportunities.