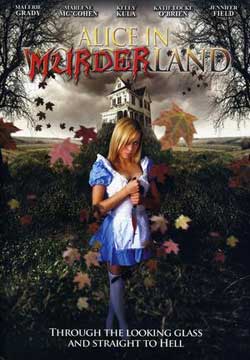 It’s Alice’s birthday and her sorority girlfriends throw her a themed party. Everyone comes as their favorite, sexy character from Wonderland. The Jabberwocky wasn’t invited and brings murder and mayhem to the girls’ night out.

Sorority Girls on Mushrooms. I think that might have been a better title for this film.

Our film begins with that dreaded title card “based on true events”. I sincerely doubt that. Twenty years ago, Ann Lewis (Katie Hotchkiss) is looking at a house owned by the strange Charlene Glass (Gabrielle Abitol). Ann can’t really afford the place, just really wanted to see it. Charlene lets her wander the house unaccompanied, and Ann is attacked and killed by a masked murderer in the cellar.

Cut to the present. Ann’s daughter Alice (Malerie Grady) is about to turn 21. The sisters in her sorority decide to throw her an Alice in Wonderland themed party at the same house, which is now owned by Mr. White (Christopher Senger), who just happens to be the uncle of Alice’s best friend Malory (Marlene Mc’Cohen). 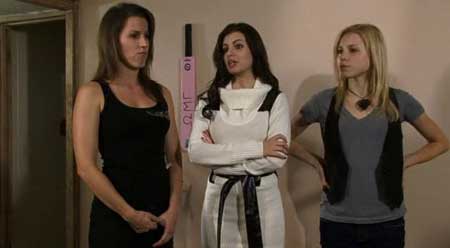 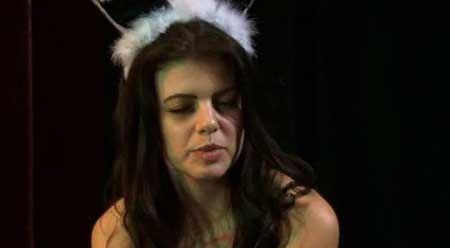 Malory sets up the whole party, designating each sister a character from the book. Each costume is chosen to match the personality of the person wearing it. Malory is, of course, the White Rabbit, as she is the host of the party. The Caterpillar is assigned to Pima (Elizabeth Lam Nguyen), a chemistry major who brought her own mushrooms. Tweedle Dee and Tweedle Dum are given to the inseperable Donna and Dee (Heath Butler, Jennifer Field). Malory’s uncle is the Mad Hatter. and of course the bitchy sorority girl Tiffany(Katie Locke O’Brien) is the Red Queen. Her minion Sammantha (Kim Argetsinger) is the pepper-happy chef. Lastly, we have Kat (Kelly Kula) who seems to disappear and re-appear at will, very much like the Cheshire Cat.

Since Tiffany is dating Alice’s ex, Matt (John Buco II), a firm “no boys allowed” rule is put in place. This doesn’t go over so well. Tiffany smuggles Matt into the party anyway, and Malory’s estranged boyfriend Andrew (Montre Bible) sneaks into the house the night before the party and rigs traps all over the place. 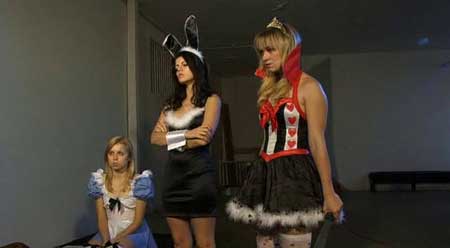 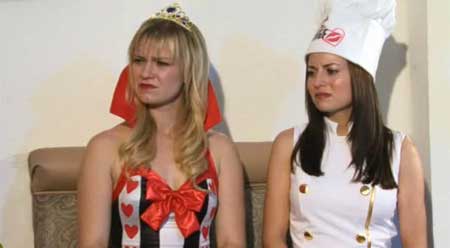 Thus sets up the worst 21rst party EVER. No booze. No boys. No cell phones. Just a tea party and charades with Malory’s (presumably) gay uncle while wearing Loved Ones halloween costumes. Tiffany gets bitchier and bitchier, which ultimately leads to a few fun girl fights. Pima starts doling out magic mushrooms, and the trip goes bad for one girl after another. Eventually, the party breaks up into three seperate groups, on different floors of the house.

And if that wasn’t bad enough…..people start dying. Apparently, The Jabberwocky is not pleased to have been left off the guest list. Murder, murder everywhere. The girls don’t realize what’s going on at first, but once they do they take matters into their own hands.

Everything in the film follows the Alice in Wonderland story, either as an extended metaphor or literally. I willing to bet that, on paper, this looked like a really good idea. and to be honest, I can totally appreciate the concept. In execution, however, I don’t think it worked out quite the way the writer planned it.

The film was written and directed by Dennis Devine, who has several films to his credit including Vampires of Sorority Row, Demon Kiss, Dead Girls, and Nazi Dawn. An interesting bit of trivia – I discovered that almost all the cast of this film have been in at least one of his previous films. 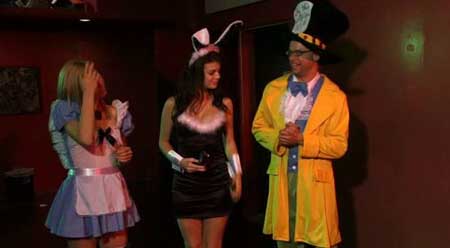 The special effects aren’t great. Mostly practical as far as I can tell, and some are better than others. The acting is hit and miss. Some of the scenes are really well done, while other scenes are not so much.

I do have to give a special note about some of the performances. Kelly Kula is quite brilliant as the Chesire Cat.   Katie Locke O’Brien as Tiffany is so over the top bitchy that you almost believe it. I absolutely loved Christopher Senger as Renee White. And Malerie Grady’s Alice is an understated performance, but as the story progresses she really embodies the character.

In spite of whatever criticisms I can make, I have to admit I kinda liked it. It’s a low budget, indie horror film that both suffers and benefits from everything that entails. I’m not going to tell you this film is great, but there are moments of greatness peppered throughout the film. The concept itself makes the film worth watching.

So one a scale of one to ten, ten being awesome, I’m giving this film 6 white rabbits. 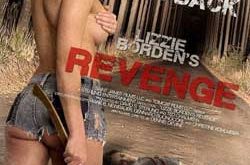