Unearthed Films and Plotdigger Films” are proud to announce their upcoming extreme horror DVD release of the film “COLLAR” in a Limited Edition Nude Version with CD Soundtrack! MORE GORE AND MORE NUDITY IN A COLLECTORS VERSION!!!
A rookie cop starts her shift like any other but soon it will all change for the worse. A derelict with a reputation of satanic violence, attacks the officer and collars her with a dog leash which is just the start of his abusive ritual. 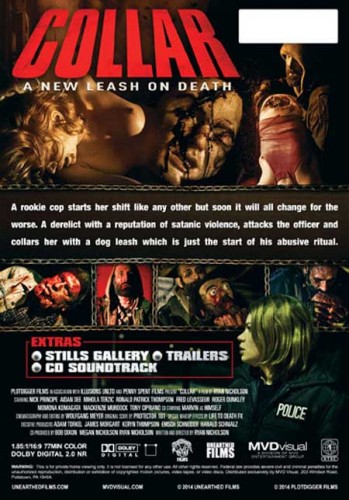 “Collar”, written and directed by Ryan Nicholson stars Nick Principe, who played Chromeskull in “Laid to Rest 1 and 2” and “Seed 2: The New Breed”. Nick plays a a satanic derelict with a taste for human flesh who terrorizes skid row’s prostitutes, junkies and homeless, escalating his level of violence after he abducts a rookie cop played by Aidan Dee, “Caprica” and “A Dangerous Man”, on a routine patrol. “Collar” also stars Mackenzie Murdock, from the horror hit, “Father’s Day” and “Manborg”, Ronald Thompson, “Hanger” and Mihola Terzik “Gutterballs”. Shot on location in Vancouver, BC, “Collar” also features a heavy assortment of gruesome FX Makeup design by Michelle Grady, who previously collaborated with Nicholson on “Gutterballs”, “Hanger” and “Famine”. Lensed by Wolfgang Meyer, “Seed 2: The New Breed” and “Stockholm”, “Collar” was Nicholson’s, had the most locations, FX and setups he had ever attempted in his full yet, varied career. 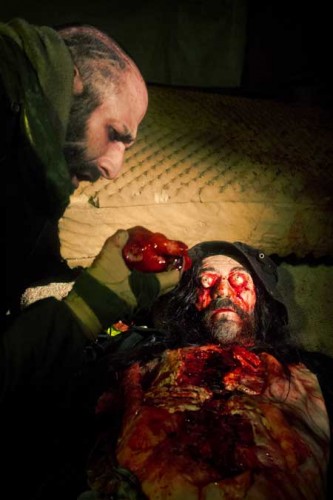 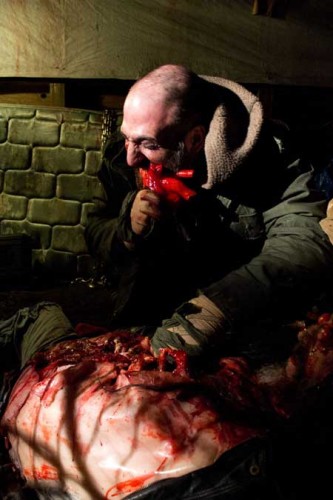 Director, Ryan Nicholson has directed the films: Gutterballs, Hanger, Live Feed, The Profane Exhibit, Famine and the upcoming movie, Cannibal Lipstick and Ted Bundy had a Son.” Ryan, as a Special Effect Supervisor has worked on such hits as, “Ghost Rider, Final Destination, The Chronicles of Riddick, Tortured, Reindeer Games and many more. He has also worked on numberous TV shows as Stargate SG-1, Smallville, The Supernaturals, Eureka, Millinium and many, many more. 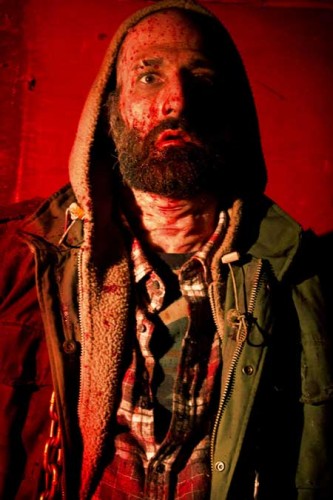