The upcoming Roddy Piper-starring short film PORTAL TO HELL has just signed a deal with distributor Raven Banner, who will come aboard the feature film version. Raven Banner will take Canadian distribution and international sales, joining XYZ Films who will rep the feature’s US rights.

The short film PORTAL TO HELL is about Jack (Piper), a semi-retired building manager who discovers a supernatural portal in the basement, and with the help of a privileged divorcé and a young neurotic, tries to stop the old god Cthulhu from becoming ruler and overlord of the Earth.The feature film will take a much larger view of the short film’s unique world and follow the ragtag group’s battle against Cthulhu on his home turf of R’lyeh.

“It’s crazy and amazing. We’re still in the middle of our Indiegogo campaign to raise money for the short film, and now we’re gaining major interest for the feature version,” says executive producer Andrew Rosen. “This boost in confidence will give our proof-of-concept short even more value when putting the feature package together. We’re ecstatic to have great companies like XYZ Films and Raven Banner behind PORTAL TO HELL!”

“We’ve been like a bunch of kids in the playground, with our hands up wanting to join the game!” states Raven Banner’s Managing Partner Michael Paszt. “What excited us most about the Indiegogo campaign was the team the producers assembled – particularly director Vivieno Caldinelli, writer Matt Watts, and special effects wizard Steve Kostanski. That, combined with their genuine passion for genre films, was the tipping point for us to want to be a part of Portal to Hell.”

“Raven Banner have been great friends of XYZ for years now and we’re huge fans of the hard work they’ve done to champion quality genre film in Canada and around the world,” says executive producer Todd Brown of XYZ Films. “Yes, it’s a horrible pun to refer to this as a tag-team but we couldn’t imagine a better partner to have in our corner for PORTAL TO HELL. We’re very excited to work with Raven Banner to bring the film to the world.”

The short film will shoot in March 2015, with the aim to package the feature film in Fall 2015. PORTAL TO HELL is part of the Harold Greenberg Fund’s Shorts to Features program, which nurtures short films with a goal towards realizing their feature versions. Hell yeah – it seems to be working so far!

Both the short and feature film will be directed by Vivieno Caldinelli (22 Minutes, Picnicface) and written by Matt Watts (The Newsroom, Michael: Tuesdays & Thursdays) and Caldinelli. Producers are Lori Fischburg and Ryan Reaney, Executive Producers are Andrew Rosen and Anthony Leo of Aircraft Pictures, Todd Brown of XYZ Films, Caldinelli, and Watts. Raven Banner will also join the feature film as Executive Producers. 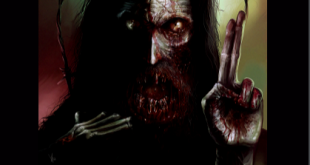 Rumors, New Edition To Portal To Hell – On Sale Everywhere