A collaboration with Guillermo del Toro and Legendary Pictures, BUNDLE OF NERVES is a short film that celebrates friendship, family and slime-sucking tentacles hell-bent on destroying the human race. 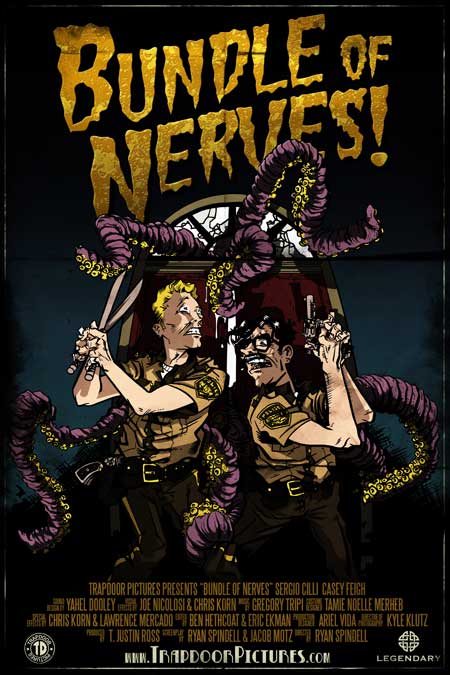 Written and directed by Ryan Spindell (Kirksdale, We Come In Pieces), BUNDLE OF NERVES is the newest short film from Trapdoor Pictures.

Produced as part of Guillermo del Toro’s “House of Horrors” project, and in collaboration with Legendary Pictures and Black Box TV, BUNDLE OF NERVES is a short horror-comedy that plays homage to the classic pulp movies of yesteryear, but with a comedic, Judd Apatow-inspired twist. “When the fine folks at Legendary Pictures asked me to make a short for Guillermo del Toro, I couldn’t say yes fast enough. He’s been a personal hero of mine for as long as I can remember.

We were given one week to write the screenplay and assemble our team, and one day to shoot the film on an amazing gothic mansion set at the Youtube Space LA. I’ve never had to put together a project so quickly and it was one of the most intense and creatively fulfilling experiences of my career.” –Ryan Spindell **** Trapdoor Pictures is a Los Angeles-based production company that specializes in horror and dark fantasy content for film, television and the web.

To find out more, check out the official website at www.TrapdoorPictures.com.