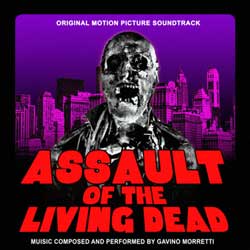 The long lost soundtrack to maligned Italian zombie horror movie ‘Assault of the Living Dead’ is now available for the first time since its ill-fated release in 1982.

Gavino Morretti is a little known Italian film composer (born 1953), who produced soundtracks for many European and American low-budget films- almost exclusively in the horror and science fiction genres.

In 1981, after leaving progressive rock band ‘Esplodere Cappelli’, Morretti was approached by infamous film director Sergio Bortolotti to produce music for his movie ‘Attacco dei Morti Viventi’ (U.S. title ‘Assault of the Living Dead’). Morretti was given less than a week to create a full-length electronic score for the yet to be filmed project. Finally released in 1982, ‘Assault of the Living Dead’ was beset with censorship issues- deemed too violent, sadistic and gory for audiences. Poor box office returns and terrible reviews saw the movie sink into total obscurity. For Morretti however, this kick-started a long and fruitful career in the world of soundtrack production…

The album is available for streaming and download from the Disko Nero Bandcamp page:
Presented as a twenty track digital download, with a seven page PDF booklet (featuring the Gavino Morretti story, photographs and more), and a digital reproduction of the original movie poster. For connoisseurs of a more degraded, lo-fi sound there is a bonus ‘4th generation VHS bootleg’ version of the soundtrack also included.

With musical styles ranging from mood-filled ambient to dramatic disco, the ‘Assault of the Living Dead’ album will appeal to fans of the horror genre, soundtrack collectors and electronica

You can also preview some of the album tracks on our YouTube page:
www.youtube.com/user/DiskoNero