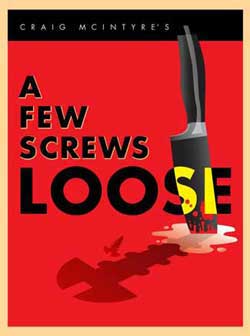 A lonely man, Stuart, enters a world of junkies, p*rn stars, and serial killers. Every scumbag in LA is out for his head. Will he survive?

As we trod through the films being created and marketed, you run into all kinds. Many will in fact fall into the category of micro-budget on the lowest scale. “A Few Screws Loose” is such a film that is reported to have budgeted at $2000 in the effort to create an extreme style horror film. While we profess to supporting the little leagues as well as the big leaguers, it comes down to story, approach, acting, and effectiveness. I have to say off the bat, this film brings on tons of mixed feelings.

“A Few Screws Loose” I believe is an interesting first effort for filmmaker Craig J. McIntyre, though it’s audience is really limited to …well …psychos and serial killers (some pun intended). Some of the issues I had were with an adlibbed script (at least it felt that way), the grab-run-and shoot filmmaking approach and of course some pretty brutal content that places it in a handful of such similar approach films and filmmakers. I know that the hand full of viewers who magically claim “August Underground” to be the next best thing will find a home with this film.

But as a reviewer I have to look at everything as a whole and lay it down for readers. As mentioned before the handheld and shoot approach is not much different than your aunt and uncle filming the local family get together No dolly shots, no perspective tricks or anything remotely required from a filmmaking 101 class. The filmmakers here chose the “follow around the actors” approach and then edit the best of the takes. As a viewer myself I require a bit more planning, though it is what it is.

Another criticism was the FX work which was more or less a few fake props with some blood bags. Of course with a $2000 budget, that’s really the extent of the supplies that can be purchased. I think any viewer will agree that none of the FX looked real or even attempted to look real. Which brings to mind another thought. How real do we want this to look? The material verges on criminal with the sole intent of filming violent acts on screen. Case in point ….a whole segment where 2 of the main actors approach, chase and kidnap an Asian girl and then hunt her down in the woods with the sole intent on stabbing her to death.

There is no humor in that…. its just plain hardcore. More of this kind of stuff follows though. While I still couldn’t put together a storyline, the acts of violence are executed one after the other. In a sequential format we begin with the 2 main characters Johnny Hawthorne and Extreme Eric filming a p*rno. In fact for the first 10 minutes, I thought maybe that’s what I was watching. The setup ends with Extreme Eric feeding a piss tube to the young p*rn volunteer which is just so wrong on many level. The angry dad pops in and starts hacking everyone to bits. Go figure..

Stuart our young focus of the film is portrayed as a victim both in his workplace and out on the streets. When getting assaulted and stabbed to death by Extreme Eric, he pulls himself together enough to heal and train in some martial arts. This of course is in preparation of the final conflict.

Meanwhile we get to see a castration scene, and a random placement of Eric attacking a young lady in a parking garage. Of course there’s no motive besides……. approach her, chase and stab.

In summary, I will have to say these kind of films that only produce hardcore visuals and no substance are not for me. There is different levels of this stuff that succeed in either humor, a strong plot or a well articulated cinema experience heightened with extreme moments. But when that is taken away you are just left with violence for violence sake. One could argue that art imitates life, in which I’ll attest to with the increase in news reports narrating extreme crime ..though I’m pretty sure I don’t need to see it.

Then again I hated the entire August Underground collection, so there ya go. Do I think there is an audience who will buy this? Of course.

My recommendation to the filmmakers is to pursue a bigger budget that allows for lighting, better cam equipment and a slower pace to frame and plan each shot. Still with all that said and done, you have to atill admire those who can film, finish, and package a film to get it out to the public. enuf said…