Will Ferrell’s comedy website, Funny or Die, is debuting a Walking Dead recap series hosted by one of the zombie extras on the show today. The Walking Fred features Fred, an enthusiastic zombie actor in his full prosthetics, vlogging directly from the set. 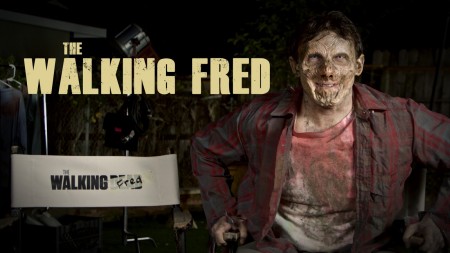 Fred takes his job on the show VERY seriously, so much so in fact that most of his recap focuses on the “walker heavy” scenes, barely skimming over the actual storyline.

Fred even has his own Twitter account, @FredTheWalker, where he gives his perspective on working on the show throughout the week. He is also, apparently, on Tinder. So watch out ladies.

Luke Barnett wrote and stars in the series that will also feature Carly Craig (Role Models, Burning Love) recurring as the production assistant constantly dealing with Fred and will eventually add celebrity guest appearances from actual Walking Dead cast and crew. Vincent Masciale, who recently did parodies of both The Newsroom and Game of Thrones for the site, directs.