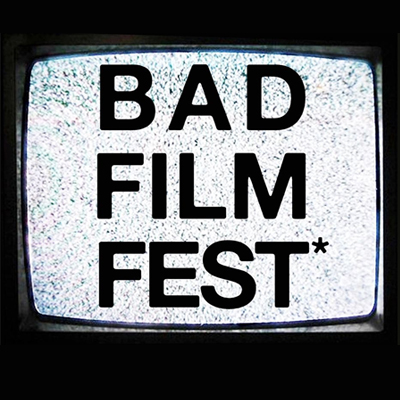 The Bad Film Fest, created as a supportive, fun and inclusive environment for aspiring artists to present anything from a disastrous first project to their magnum opus, is accepting submissions for their 3rd annual festival. Filmmakers may submit through www.badtheaterfest.com/home/bad-film-fest-2015/ or through FilmFreeway at filmfreeway.com/festival/BadFilmFest. The Regular Deadline is Dec 31, 2014 with budget-friendly submission fees delineated by running time: $1 for films under 5 minutes, $3 for up to 10 min in length, $5 for up to 29 min, feature-length / anything over 30 min is $9. Festival dates for April 2015 will be announced after the final March 15 deadline.

Presented as an extension of the Bad Theater Fest, the Bad Film Fest openly encourages artists to free themselves from the anxiety of whether the audience will love or hate it – have fun and make anything. The Brooklyn Paper called the 2nd annual festival “(a celebration of) pieces of cinema that are ‘so bad they’re good'”. Time Out NY had a delightful there’s no such thing as bad publicity view of the festival saying “…most of the films are utter swill.”

“It’s not that we have low standards,” says Bad Film Fest Co-Founder Starr Kendall. “We have different standards. We want to curate the most diverse festival possible. Part of the motivation behind openly searching for bad short films is to make a venue available to those projects that don’t belong anywhere else. Plus it’s fun to watch a bunch of bad films in a crowded theater.”

Some of the past festival highlights include an ultra low budget 3D horror film about spiders, a cautionary tale on the dangers of voodoo made on a VHS camcorder by drunk teenagers in 1987. Plus a spoof cooking show touting recipes for low-calorie, tiny entrees.