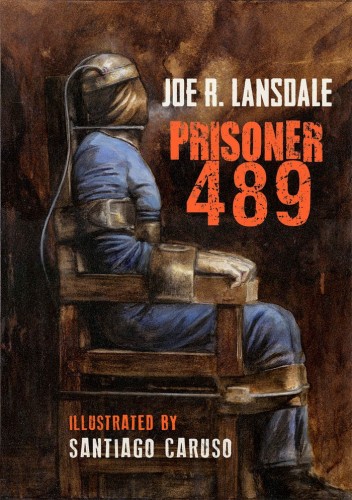 Joe Lansdale. If I have to tell you about him, I’m not sure I want to talk to you any more. The premier purveyor of sun-baked Texas grit and straight up goddamn oddity has been tapped by Dark Regions Press to be paired with artist Santiago Caruso for the second of their Black Labrynth novellas. If you don’t recall, I kinda liked the last one, so let’s see how this puppy stacks up.

The two islands are no vacation spot. One holds a prison for some of the stranger elements of the planet. Those nations want to disappear, that can’t be allowed trials and hope for eventual return to society. The other holds the only option for release in discrete 3x9x6 foot plots. Bernard minds those graves, digging them and placing the non-descript numeric tombstones, as the days blur into each other. Tonight should be just another meat filled hole in the ground, but this one rides in wrapped in steel and chains after riding old sparky four times and there have been rumors of something unnatural at work.

It should be enough to say that this is a traditional gothic tale steeped in Judaic legendry and told through Lansdale’s no nonsense style, but you probably want more than that. On a simple front, it hit me as a lighting quick tumble and tussle with one bad ass mofo of a messed up monster. It’s tight, lean, mean and f*cking crazy but with enough heart to get me actually caring about this gravedigging fool. Good times were had.

On a deeper level, I admire the hell out of how much Lansdale does with so few words without ever stopping the narrative or getting preachy. It makes for a wonderful exploration of isolation and dehumanization and what that does to our basic humanity. What it turns us into when we are turned inward too deeply. There’s also a bit about actions we are willing to take by rote, without thinking of what our part in the larger scheme may mean. I want very much to go further into detail, but I don’t want to ruin any of it for you.

It does bear warning that the first few pages are a tad dry. They seem mired in description and meditation without action. Personally, I think this was necessary in establishing the depth of removal from other people, both in a literal and metaphorical sense. It also allowed a little bit of time to settle down into the old rocker on the porch as Champion Joe trickled out another one of his yarns. All the same, I know it will aggravate impatient readers who want to jump into the action. Don’t worry, kiddies, it’s worth it when you get there.

Initially, I was a bit disappointed in the cover art for this one. After the intricate and bizarrely detailed cover of the last BL book, I expected something less mundane. However, it fits very well with the story itself. Deceptively normal if not for one small detail that would be nearly impossible to catch unless you knew what to look for. But then, once the weird hits you, you can’t look away from that detail. It’s just a shame that those who ordered the hardback version of the book won’t see this in color since that is where this little touch shines.