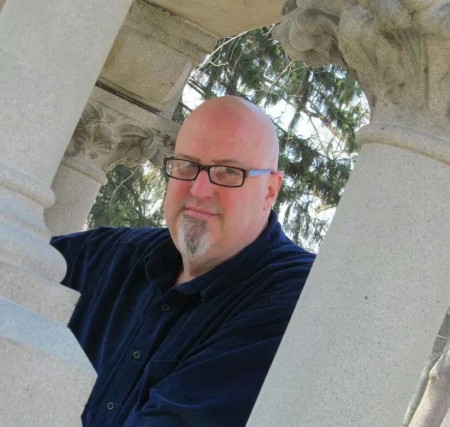 So, John, thank you for sitting down with us today to discuss your writing career, the state of the horror industry and your latest volume of horror fiction, The End in all Beginnings. That’s an interesting title for a collection of novellas. Can you tell us what it means and give readers an idea of what they will find in the collection?

Thank you for having me. With The End in All Beginnings, I guess I wanted to touch on everything that life encompasses—love, loss, death, sacrifice, faith and all the other little horrors and sorrows along the way. That’s the theme that really ties the stories together, the poignancy of loss and sorrow that goes hand in hand with every one of life’s beginnings.

I’m hoping that what readers will find is a collection of horror stories of a kind that they’re not necessarily accustomed to reading. The novellas touch on a range of human emotions, and it’s really those emotions and the characters that carry the stories and give the reader the kind of thematic underpinnings they might not get from other horror stories. I’m trying to show, I guess, that horror doesn’t have to solely be represented by blood and gore. There are other, far scarier things out there awaiting us.

The End in all Beginnings has been receiving some truly incredible reviews from your readers and from some heavy hitters in the horror industry, including Jonathan Maberry, Kealan Patrick Burke and horror icon himself Jack Ketchum. Obviously these great reviews must be thrilling to receive. But how do you, as an author, react to such high praise of your work?

Well, it’s a little discomfiting, really. What I’m finding, and it’s a bit perverse, is that I sometimes find that it’s easier to accept criticism than it is praise. Sounds weird, doesn’t it. But I guess I’m more wired to accept the sort of righteous indignation that arises from bad reviews than to accept the shy embarrassment that comes from praise. But that said, bring on the praise and hold the criticism!

The End in all Beginnings follows on the heels of yet another successful release. Your Little Deaths was published two years ago, became an Amazon bestseller and was named “the #1 Horror Collection of 2012.” And reading some of the reviews for The End in all Beginnings, it looks like you have another hit on your hands. How do you continue to build on past success? And how do you go about keeping your work fresh and relevant, able to entertain current and new audiences?

Well, it’s nothing you can plan, of that I’m sure. I mean, sure, it’s there in my mind, always striving to do better, to rise up over the bar I’ve set for myself with previous works. But it’s not really up to me, is it? I mean, beyond setting myself down and committing to produce the best pieces I’m capable of. It’s really up to the readers. But keeping the work fresh and relevant is entirely up to me. It’s part of the job as an author, to make sure your work always connects with someone. Maybe not everyone, but someone. And that starts, always, with making sure I’m connected. That the idea, the characters, the story connects with me, interests me. Because if it does, then it’s easy to extend that to readers. Writing something you’re not really connected to in the first place shows easily. 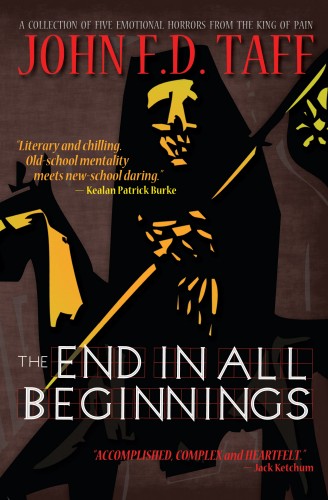 You’ve been writing horror fiction for more than two decades. During that time, how has your approach to writing changed?

It’s gotten more serious and more of a business. I’m not employed in a day job now, so the writing is the day job. I pay more attention and try to achieve more with it. It’s definitely become more of a passion, too.

You have stated yourself that your version of horror fiction is often more quiet, more cerebral and more character driven than that of a number of other horror authors who prefer blood, violence and shock. The publisher of The End in all Beginnings, Grey Matter Press, even calls the collection literary horror. How do you see horror literature fitting into the genre today?

Well, first, let me make it clear that I’m in no way denigrating blood, violence and shock. I see horror as a spectrum across which there’s room for a whole lot of different approaches, from splatterpunk to my sort of Twilight Zone-ish kind of horror. That said, I think it fits in well. Here’s the thing, I’m not sure that my stuff, even lacking huge amounts of blood or gore (and my work does have some of this), is less scary than these other approaches. I think what sets my work, and other authors who take the quieter approach, is that the horror is deeper, more subtle, and requires the reader to really think on it a little before realizing exactly what the ramifications are. In that, I think this type of horror sticks with the reader a little longer, makes more of a long-term impact than a lot of bloodletting.

When it comes to horror, a number of naysayers claim the genre is dead. But then, we know critics have been predicting its demise for years. Over your lifetime, how have you seen the horror genre change, and where do you predict it will go in the future?

Let’s face it, Horror, as a genre, is a little harder to pin down than the other genres because it’s the only one that’s entirely based on an emotion—fear. Not so for scifi or romance or fantasy or whatever. Well, then again, maybe for romance… But horror isn’t going anywhere. It might be stretching its boundaries and altering what it is that makes it “horror,” but it’s not going away.

Horror kind of erupted onto the scene with King back in the 70s and exploded from there with Straub, Barker, Rice, Koontz. And then, inevitably, it went through a decline and several more hills and valleys in the time since. But think of the authors who have made horror what it is over the last 200 years or so. They’re not exactly slouches—Poe, James, Lovecraft.

For some reason, though, some authors don’t like to say they’re horror writers because of some perceived negative connotation. Not me. I’m a horror writer.

In the future, I think horror as a genre will grow to encompass a lot of different themes and styles and tones. Because growing is what a healthy genre does, and the very things that make horror what it is is what will allow it a huge palette to fill, much larger than scifi or fantasy.

It’s no secret that, during the last several years, the publishing industry has experienced a number of changes, with the closing of bookstores nationwide and the advent of electronic publishing combined with what appears to be the perception of a decreasing interest in the American public to read. How have you changed what it is you do to compensate for these changes in your industry?

I haven’t. I mean, it’s all reading, it’s just a question of how your work reaches the market. I do what I do regardless of the medium. Electronic, print, whatever. And I’m not sure there’s a decreasing interest in reading. I think the marketplace is changing, and hasn’t yet caught up with how people want their reading delivered.

How does a successful author of horror develop literature that interests readers, and how do you reach out to an audience that has so many entertainment alternatives – movies, video games, etc. — and get them interested in picking up a volume of your work?

I make sure that my writing takes advantage of what strengths reading brings to the table over all of these different media…and that’s the advantage of total immersion offered by playing to the imagination of the reader. Let’s face it, nothing equals the sheer scope of what you imagine on your own while you’re reading—no huge space movie with great FX, no video game, nothing. If you’re an author and you create a story that lets your readers’ own imagination, their own fears and hopes and joys and emotions fill it in, you’ve created something no other media can do because you’re taking advantage of the reader in a way no other media can.

So, what comes next for John F.D. Taff? Can you share any news about upcoming releases or give us an idea about anything you might be working on right now?

I’ve got some short story projects coming, some things I’ve been invited to. I’m appearing in a best of collection that will be announced soon. I’ve got an announcement with Grey Matter Press very soon on a standalone novella. I’ve got two novels coming out with Books of the Dead. The first, Infestation, should be out very soon. The second, The Orpheus Box, sometime after the first of the year. And a new novel hopefully done at the first of the year, too.

You are holding a competition that is going to put one of your real-life fans into an upcoming novel as a fictional character. Can you tell us about your Horror Star Contest, what the winner will receive and how interested fans can get involved?

My new novel, The Fearing, is fast becoming a huge, sprawling epic horror novel. As a way to reward people for providing those all-important Amazon reviews, I decided to conduct a contest where the winner gets made into a character in the novel. The contest is simple. Buy The End in All Beginnings, read it, review it on Amazon, then go to my blog or the Grey Matter Press Facebook page and link to the review. That’s it. The original intention was to close it at the end of October, but we’re holding it open for a while and adding some more prizes to the pot.

For more information, visit my blog at johnfdtaff.com, follow me on Twitter @johnfdtaff or visit the Grey Matter Press page at greymatterpress.com.