Home | Take a Trip WAY DOWN IN CHINATOWN – New Release

Take a Trip WAY DOWN IN CHINATOWN – New Release 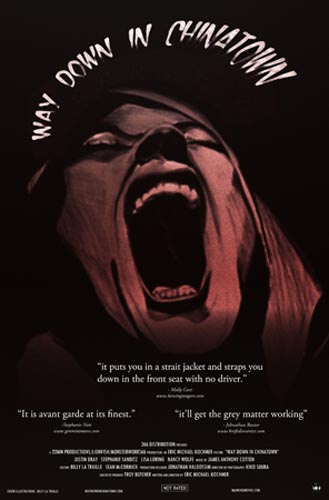 “The team who put this film together certainly succeeded in their mission if it was to leave the viewer disturbed.” – Stuart Hine

THE STORY: Playwright Victor Mitchum and theater director Jessica Mitchum work exceedingly hard at creating new and innovative work for the theater. As they venture into their new dark musical, “Apocalypse Tomorrow” (inspired by Leadbelly’s “Goodnight Irene”) they suddenly find themselves seduced by the underworld that is being created to preserve the few.

Annie, an elusive temptress with the voice of a worm-like angel, slithers her way into Victor’s soul, causing a rift in his marriage to Jessica, who is equally lured by an ominous mirror image of herself, (Mara). Both of the possessed protagonists descend morally before they are compelled to walk downtown and face the underground theater, and themselves, for possibly the last time.

Way Down in Chinatown is a surrealistic horror film in the same vein as Eraserhead and The Rocky Horror Picture Show. The film can be classified as a black and white, Expressionist noir. Influenced by Fritz Lang’s Metropolis, Jean Luc Godard’s Alphaville, and Rainer Wener Fassbinder’s Veronica Voss, Chinatown takes elements from all these classics and melds them into a catastrophic delight to watch.