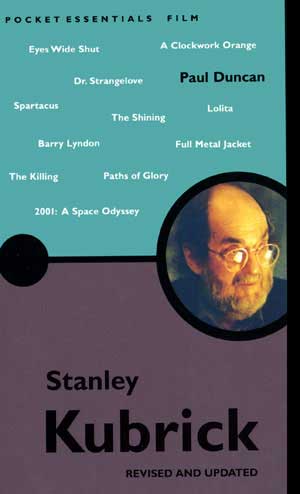 Kubrick, the genius, the recluse, the hermit, the mystery has and is highly regarded as one of the great auteur film makers of our time. Certainly his impressive body of work has proved that alone. In this latest edition from pocket essentials, we are given just enough to wet out appetites. A rather small book of 96 pages it still gives its readers the materials to make conclusions, seek out films and learn a bit about the man and his movies.

The primary purpose of this read is to cover Kubrick’s film library which while impressive is still limited to a relatively smaller span of film work than some . By choice Stanley would sometimes span his film production over months and years depending on his mood or creative instincts.

As explained, Kubrick sees all in his films. Every detail is a process of complexity and reason that formulates into the making of his works of art. This is especially proven as author Paul Duncan breaks down the film analysis into multiple explanations for imagery, character narratives, locations, emotional aspects, production changes and symbolism. In fact, I found the section on “Eyes Wide Shut” to be entirely fascinating. I’m sure a bit of that was a composite of the many books Duncan researched on Kubrick, but nonetheless, it demands attention into the detail and artistry way of thinking that Kubrick instilled into his films. For instance in “Eyes Wide Shut” the use of symbolic red, the naming conventions, the masks and there hidden meanings, the emotional breakdowns and reflection of situations seen in other parts of the film. Its all there to take in, nourish and experience in a new light than a simple viewing pass thru.

These deep emotional and symbolic suggestions are what makes his works so special. That in a viewing you can sit back and take it further with you than a conventional film experience. Kubrick employs this method in all his films and ventures into the theme of man always at war with his environment. Again further explorations into “Shining” “Full Metal Jacket” and “Clock work Orange” are analyzed and given deeper breakdowns. Clockwork with its excessive violence breaking down the translation of mans free will and societies means to subdue and control that. And “The Shining” with its mental breakdowns due to isolation, a haunted establishment and unique use of symmetry and mirrors. We even get a bit of the location information of the original shots and film sets.

All provides that base of reasoning and visual exploration. Paul Duncan talks about Kubrick’s early years as a photographer and his movement into film as his main medium of choice. Lucky for us, I say! Even his earlier works such as “Day of the Fight” “Fear and Desire” and “The flying Padre” are looked at to establish his roots that led him into greater accomplishments.

Sadly Stanley died on March of 1999 at age 70 just after completing his masterwork “Eyes Wide Shut”. For those looking for more lengthy drawn out breakdowns, wont find all of that here as its still limited to a small page count. But it is a nice little take along and you do get some cool facts about his productions.

This is a book that reminds me much of the kind you see while waiting in the supermarket checkout out line. Though to take on such interesting subject matter puts it at much higher value to my reading interest than another tiny book about weight loss in 30 days. At its small price $4.20 which is about the same price of a comic nowadays, you really can’t go wrong. Really!

So do yourself a favor and collect as many of these tiny reads as you can find. They are all well written and pack a informative punch when your killing time or need to just get caught up on your film maker histories.