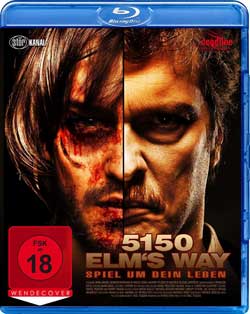 5150 ELM’S WAY is located at the end of a quiet street in a small town. When Yannick fell off his bike, he knocked at the door of the Beaulieu residence so he could clean the blood off his hands. But Jack Beaulieu and his family had other plans for Ian. Beaulieu is a righteous psychopath and fanatic chess player who wants to rid the world of evil. And even though Ian has done nothing wrong, he is beaten, tortured and tormented before Beaulieu makes him an offer: win at chess and he is free to go. And so Ian is now a pawn in Beaulieu ‘s game. A game in which he will either lose his mind or his life.

An eye for an eye. What is good and what is bad in this world and is it acceptable for good to punish evil? These are the types of questions 5150 Elm’s Way (5150 Rue des Ormes 2009) raises and in doing so discovers that what is good and what is evil is not as black and white as one might think. Set in a small town, this Canadian French horror film is one that has been lost in the mix. I was lucky enough to check it out and was highly impressed with its intelligent exploration of family, religion and insanity all wrapped up nicely in a horror film. 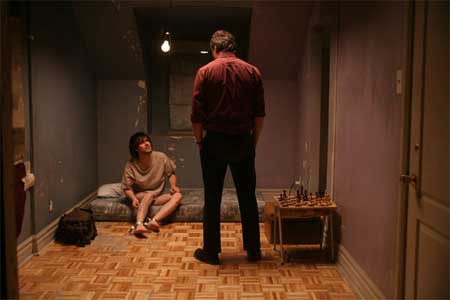 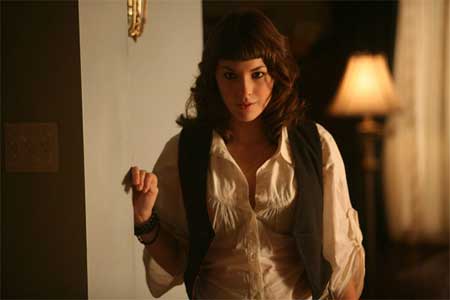 The film starts with Yannick a 22 year old student, who is moving into his film school campus for his first year. His family help him unpack and not before long he is out exploring with his camera taking photos of the neighbourhood. He cycles into Elm’s Way to take some photos and on his way back a black cat runs in front of him causing him to crash his bicycle. Beautifully tongue in cheek this scene sets the tone for the malevolence that is soon to occur. Yannick enters a families house for help only to find a young man in the upstairs room, bleeding and screaming for help. All of a sudden the young man is killed and Yannick is locked in the room by the father of the house to stop him from going to the police.

What entails is a deep exploration of family and the breakdown of Yannick’s mind. Every member of the disturbed family is authentic. Their motives are real as a religious family who believe that they are doing right even if to the outside world it may look wrong. The patriarch of the family is the twisted Jacques Beaulieu played by Normand D’Amor. He believes he runs a ‘righteous army’ against the evil doers in the world (drug dealers, pedophiles etc.).  Jacques fascination with the game of chess plays a large part in the film as the visual representation of black and white and how the father believes his gift at playing the game is his justification for doing God’s work. His wife (Sonia Vachon) plays a God fearing woman who only wants the best for her children even if that intercepts with the father’s plans for ridding the world of evil. Both actors give strong performances especially Vachon who gives a heartbreaking account of a good woman trying to do what she thinks is best. 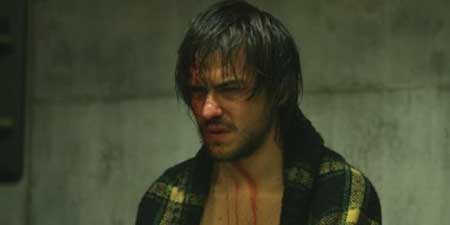 What makes the film stand out from other crazy family horrors is the transformation each and every character goes on during the film. Unlike your typical horror villain who usually has little to no character arc, each member of the demented Beaulieu family start in one place and end the film as changed people. Yannick as the captive who seems to be truly good, unlike the other evil-doers who Jacques has killed previously, is the catalyst for the families destruction as they become either jealous or attracted to him. 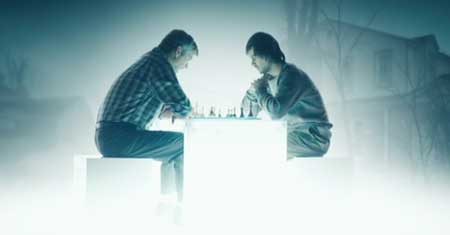 As Yannick loses his mind the film visually begins to create a fantasy world that represents what is going on in Yannick’s head. This is done seamlessly and only amplifies the insanity that Yannick’s confinement is having on his psyche. Director Eric Tessier does an excellent job in creating non-stop tension and horror in the film with his use of music and intensive editing. The film’s final act is a wonderful display of how low and desperate each character has become and the reveal of Jacques master plan is terrifying.

Rarely do we get to see such intelligent and thought provoking horror. 5150 Elm’s Way (2009) reminded me of Martyrs (2008) another French language film exploring man’s idea of God and the ways that man can communicate with Him. So if these themes interest you check this little gem out and trust me once it’s over you will never look at chess the same way again. 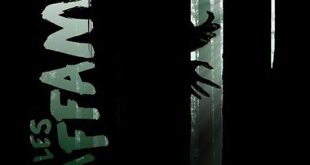