We are delighted to announce that the global smash-hit video game franchise, Bayonetta, has been made into a feature length film, and is coming to DVD and Limited Edition Blu-ray Steelbook on 24th November (from Manga Entertainment). 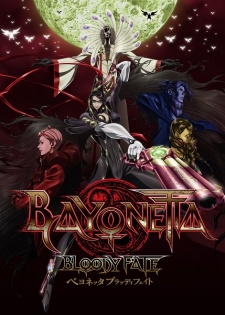 Expect all epic action and the sexiness of Bayonetta in anime form for the first time by Studio Gonzo (Origin: Spirits Of The Past, Linkin Park’s “Breaking The Habit” music video, Afro Samurai: Resurrection) who make sure whether you’re an existing fan of the franchise or new to it, to give you ride you won’t soon forget.

Bloody Fate follows the story of the witch Bayonetta, as she defeats blood-thirsty Angels and tries to remember her past from before the time she awoke, 20 years ago. Alongside her is a mysterious girl who calls her “Mummy”, a journalist that holds a personal grudge against Bayonetta and a unknown white-haired woman who seems to know more than she is willing to reveal about Bayonetta’s time before her sleep.