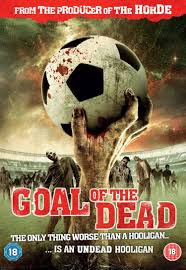 Returning to his hometown for the first time since his big money move to the professional leagues, Sam Lorit expects a joyful homecoming and a routine cup-game victory. But with the zombie outbreak fueling bitter rivalries, the players and their entourage are dragged into a brutal game for their lives.

I am not a fan of soccer. I find the sport boring, a bit vacuous even. Perhaps I’m just jealous of the athletes that participate in it, they’re all in peak physical condition (I’m not), and they spend the entire length of the game furiously running back & forth (I don’t run. Ever.). And the idea of doing all of that furious running for 90 minutes or so, only to have a game end with a score of zero to zero, just makes me nuts. People die watching soccer games for Pete’s sake, the least the players could do is score a couple of goals to honor the fans who are killing each other in the stands while they’re watching. I mention my distaste for soccer because I just watched Goal Of The Dead, which I suppose could be construed as France’s answer to Shaun Of The Dead (2004), and involves a zombie outbreak that takes place during a soccer game.

Alban Lenoir plays Sam Lorit, a soccer player who’s nearing the end of his successful career. His final hurrah is to be a game pitting his team (Paris Olympic) against the team from his hometown, Caplongue. It’s a big deal for him because he left his town 17 years earlier to follow his dream of becoming a soccer superstar, but he’s never once returned to his town afterwards. The populace of the sleepy little town is extremely angry at him for never returning and are vehemently campaigning against him & his team. One of the maligned townsfolk is a doctor who has a wacky plan to ensure that Lorit’s return will be a memorable one though, and it involves the creation of a soccer monster. But the serum he’s created to create this beast has some nasty side effects – and it’s highly contagious. 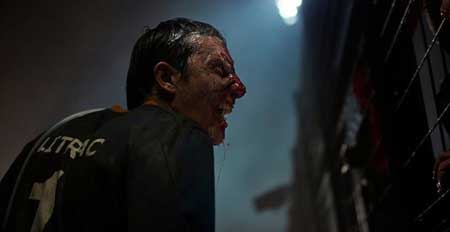 Co directed (With Thierry Poiraud) by Benjamin Rocher (The Horde), Goal Of The Dead posits itself to be an extreme zombie film with comedic elements, but it’s not as witty or as funny as it thinks it is. It definitely looks good and has a few manic performances to help move things along, but its story isn’t quite as strong as it needs to be, and its inherent silliness creates a lot of moments during which I was wondering exactly what kind of movie the directors were trying to make. But it does get extremely gruesome at times, with some scenes of extreme carnage that made me sit straight up & say “Whoa“. I thought that the method used to transmit the virus was unique until I remembered 28 Days Later (2002), and realized that it wasn’t. But it’s still visually effective & extremely repulsive. 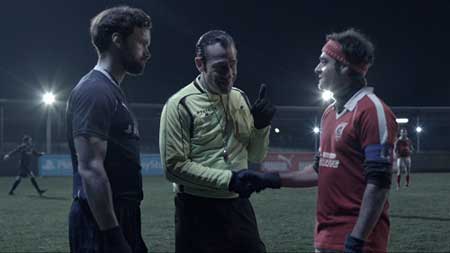 One thing that really slows down the proceedings is something I’ve never seen in a movie before. After one hour is passed, it sort of reboots and we get a new credit sequence – smack dab in the middle of the film. The big difference between the two halves? The second half is directed by Thierry Poiraud. The sudden switch is meant to act as a sort of halftime between acts, much like an actual soccer game being divided into halves. But it’s a jarring decision and since the second half picks up exactly where the first half left off, with no deviation in tone at all, it all feels quite self indulgent. Additionally, there’s no way that a film like this should last more than 90 minutes, 100 minutes tops. 20-30 minutes of this could’ve easily been shorn away with little to no effect to the rambling script (Co written by 6 people)!

Admittedly, when I first heard the title of this film I assumed it had something to do with something the zombies wanted to achieve (a literal Goal Of The Dead). Imagine my surprise when I realized it was a reference to soccer, then imagine my disgust at the idea of a soccer game played with zombies. And while this doesn’t quite sink to that level, Goal Of The Dead does feature a lot of soccer. And while I’m not a fan of the sport, the film did manage to entertain me far more than I had expected it to. The good performances and some extreme gore make it quite the unique experience. But it’s excessively indulgent length & moments of silliness that are neither funny or necessary bog it down. It also ends rather suddenly & it felt unfinished to me, and that’s really saying something considering its length. 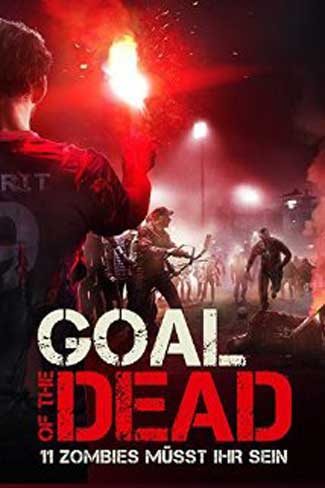 But if you’re in the mood for something decidedly different, then Goal Of The Dead fits the bill. If you’re a soccer fan, then it’ll probably strike a bigger chord with you as well. Cut 20-30 minutes out of it and you have one of the better movies of the year, but at its current length it only manages to be a decent waste of a few hours. 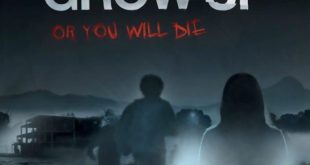