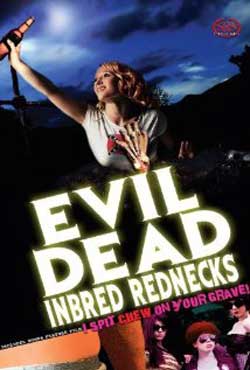 Witness one of the most bizarre & confounding flicks ever made in EVIL DEAD INBRED REDNECKS! In a small cabin on the edge of a park, a group of friends gather for fun. But when they come across a mysterious book, and of course despite all warnings read aloud from it, they unwittingly unleash a ghostly evil. The book resurrects whacked out redneck Leo DeChamp, a serial killer who used to strangle kids with skunk tails in the 1960’s. Leo has returned to terrorize all with his unique brand of “redneckian” villainy, and to claim more young, nubile (and downright not so nubile) victims

I’m not really sure where to start with this bad taste excuse for a comedic horror movie….perhaps, ‘Dumb By Dawn’ would be Tthe more appropriate title.

Upon open, we are greeted per way of ‘drag queen’ (Chris Elder) talking about how bad the movie really is. In a gravelly voice this quickly leads into a spiel about bad acting, bad directing, and how we will all hate the movie (great….thanks for the heads up). I have to say when I heard this I thought, “maybe its not so bad”….. (how very wrong I was). Coming in at only 45 minutes in length, “Evil Inbred Rednecks” is a 45 minutes I wish I could get back. 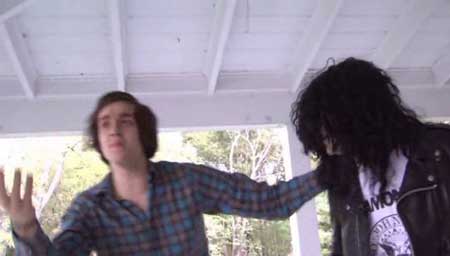 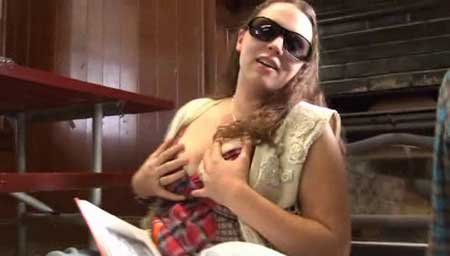 Enter a scene with a group on there way to a cabin where they plan to stay for Halloween. Foul mouthed words and bad sexual euphemisms start the show, only growing worse from there.

Failing to find any purpose in the film, I’m left with trying to relate to the characters and their bad wigs. Character names flew overhead leaving me with the feeling that ’I’ve intruded on someone’s “accidentally released” personal home movie. This segues into a bad montage of used condoms and crude character interactions that further adds to my wasteful viewing experience.

A book labeled ‘Black Magic’ begins the story over an argument of whether it should be read or not. As you guessed….it gets read. The careless group unleashes a ghostly evil called “Redneck Leo DeChamp”, the most brutal of the rednecks, who finds ways to invade each person also turning” them” into full fledged rednecks. 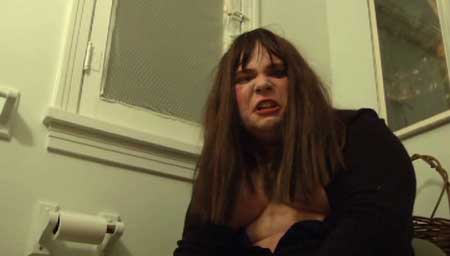 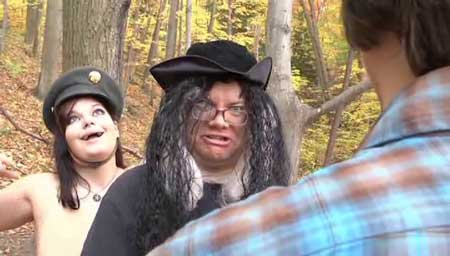 The film manages to entertain us with choice lines such as: “spit on your face and shave your arsehole”, “I wanted to be raped by a redneck”, “her dainty crease oozing”, and “ancestral ancestry pushing through your p*ssy” just for starters furthering my belief that our group is not too bright. There is a scene in the forest about breast milk that is “so bad”, it’s beyond discussion. I’ll save that experience for future viewers.

Beyond the occasionally cool heavy metal backing,  “Evil Inbred Rednecks” is an amateurishly-produced-low-budget film best served to stoned or wasted viewers. Beyond that, it’s simply a waste of time.

We are often interrupted by our resident drag queen host who seems obsessed with fart jokes and narrating the film with just enough vulgarities interjected to make it less than entertaining.

A high point for me was the Michael Jackson look-a-like who confronts Leo in the final act proving some level of watchable acting. Pretty funny stuff. 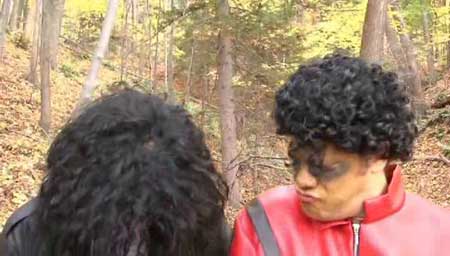 Basically, “Evil Inbred Rednecks” is crap!  There’s not too much to say, it’s cheap horror……..if you like that, then check it out.

Chris makes a good point at the end. If you don’t want to watch this sh*t then send him money to make better movies – cheque book is out and ready Chris! 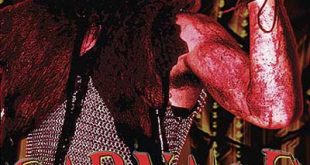 Film Review: Carnage For The Destroyer (2006) 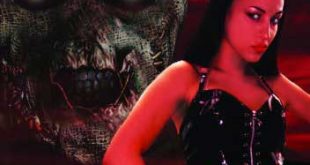