A group of supposed teens decide to spend the weekend in an abandoned hospital for some paint ball, booze, and of course sex.  What they don’t realize is that a homicidal killer calls this hospital home and he’s not happy that they have intruded.

Director David Worth, who brought us Bloodsport (1988) and Kickboxer (1989) now us this run of the mill slasher movie.

We start the movie showing the torture and killing of an unknown girl.  We then are greeted with splashes of a montage of what appears to be stock footage of the war over in Vietnam interlaced with the deaths of more victims.  This is the introduction to our antagonist, Hazard Jack (Quincy Taylor).  We never see his face as he wears a helmet with a visor covering his face.  We are also never given a clear reason why he’s decided to kill people, other than PTSD from the war.  After this introduction, I really felt like I might be in for a decent ride into the Hell of this killer.   Or not! 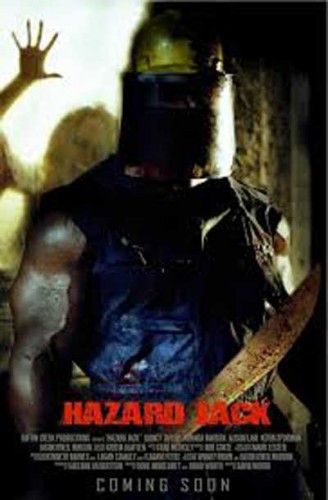 Enter the victims: a bland, uninteresting group of college kids that have about as much character as a wet blanket.  They are about as cookie-cutter as you can get.  We have the jocks, the nerds, the sweetheart couple, and even a gay couple who are the cooks.  The gaggle of friends has an annual outing to play paintball war games, and this year’s festivities they have agreed to meet at an old abandoned hospital.  After breaking in and realizing that this old hospital still has power, they map out their paintball area and partake in some booze, food, and good ole fashioned strip target practice.

Once they break off into teams and prepare to start their “capture the flag” games, they pretty much immediately forget they are playing paint ball and start in the debauchery.   The jocks all decide that they would much rather have sex, and the other group decide to just sleep.   Hazard Jack is having no part of any of this.  He’s decided to dispatch of these friends in very unoriginal ways. 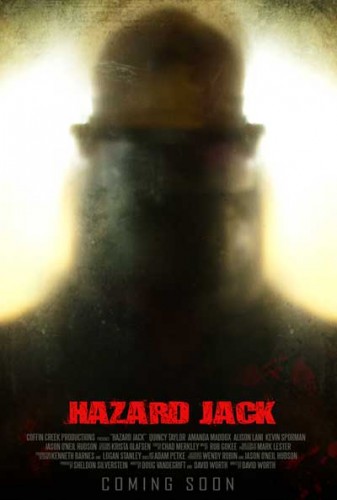 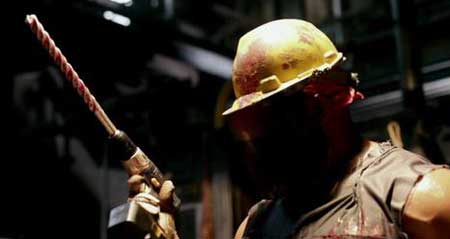 There are really no graphic scenes of gore or any decent kills.  A drill to the head, a heart being ripped out, but they really don’t show much.  In fact, I really feel that this movie received an ‘R’ rating simply for the nudity and a simulated oral sex scene.  For a slasher movie made in this particular age, this movie is less than visually exciting.

What this movie does have in spades are the most obtuse, lifeless, and drab characters I’ve seen in a long time.   Not once did I ever feel any fear for these people’s lives.  I often rooted for the killer to off them in different ways; however, the killer is also dismal and insensate.  The only two characters that I felt anything for were Bridget (Amanda Maddox) and Stella (Alison Lani).  It’s too bad that these two characters couldn’t save the movie from being anything more than stodgy, bland story. 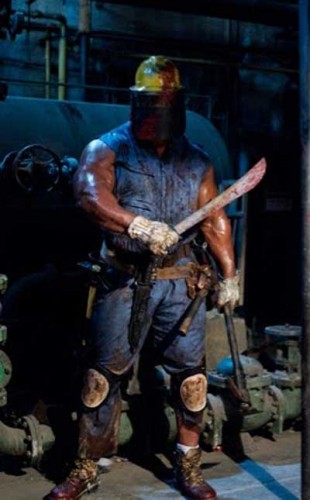 The writing in this movie is abysmal.  It almost seemed like they didn’t have much direction whatsoever.  It almost seemed like the actors were given a place to play and were told to just “wing it” when what they clearly needed was proper guidance.  Next the music score was nearly as bad as the writing.  There was nothing special about any of the score.   The casting was also horrid.  Supposedly portraying teens, there was more silicone being shown than Housewives of Beverly Hills.  The gay couple was funny to watch but again, not enough to really make the movie better.  Finally, while our killer was obviously supposed to be suffering from PTSD, he was more like a vengeful construction worker killing with tools left behind by previous workers. 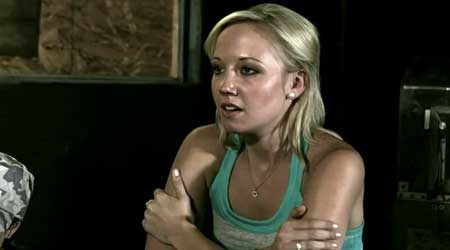 My final thoughts on this movie are that for a slasher movie, I feel it falls flat.  I would have liked a better reason for Jack’s reasons for killing other than PTSD, and I would have liked to feel something for these yahoos he was killing.  I wish there would have been a lot more tension as well.  It was nothing special in the area of slasher movies and in 2014, with all the other slashers out there, David Worth should have known he would have to step up his game.   You should watch this movie if you’re a die-hard fan of the slasher genre of movie, just don’t expect anything new or exciting.