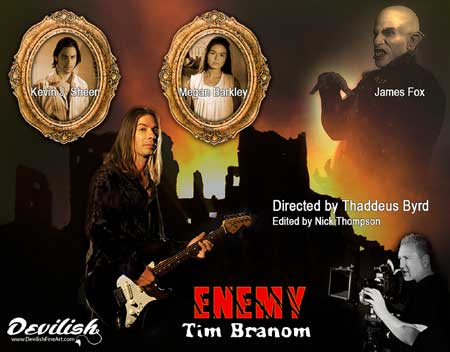 “It’s like a preview to a vampire movie,” Branom said recently while on break at his Los Angeles studio. Intent on creating a horror classic, Branom enlisted acclaimed filmmaker Thaddeus Byrd (Second Coming, Hills of Elysium) to direct the music video. “The story takes place in the 1800s, so I shot on film instead of digital media to achieve an old feel and depth to the characters,” Byrd commented during a break in post-production. “We used a castle for the shoot. The costumes are over a hundred years old. We used three special effects makeup artists to make Nosferatu come alive. I think fans of the horror genre will love it.”

The multi-talented Branom, who performs vocals, guitar, bass, and keyboards, tapped his sprawling network of entertainment heavyweights to create the unforgettable video. In addition to director Byrd,  Branom called on Claudio Cueni (Beware of Darkness and 2Pac) to mix and master the sound, while Game Show Network’s “Skin Wars” standout and world-class body painter Dutch Bihary leads the “ENEMY” FX team. Bihary, whose work delivers a horrifying realism, laughed, “Pumping blood as thick as molasses in October was a real adventure. The video is incredible.”

The vampire themed video stars James Fox as Nosferatu, Kevin J. Sheen as Jonathan Harker, and Megan Barkley as Lucy Harker.
Branom, Byrd, and Fox previously worked together on the underground classic “Father Rock”, a film that not only showcased Branom’s music and acting, but also gave Alice in Chain’s Layne Staley his first ever speaking role. The cult favorite, which features music from an early incarnation of Alice in Chains (including future members of Second Coming and My Sister’s Machine), has stirred controversy in recent years. Despite Alice In Chains fans posting YouTube videos of what appears to be Staley singing in the film, Director Byrd sets the record straight. “People always think it’s Layne singing in the movie when it’s actually Tim Branom. At the time, I decided to replace the audio with Tim’s studio recordings which were actually much better than the songs we had of the earlier version of Alice in Chains.”

Speaking about his departure from Fifth Angel, Branom was typically frank. “After me, they went through two more singers, played one show (Keep it True XIII Festival), and then disbanded with no new material. I think that says it all.”