20 years ago two boys disappeared in the swimming pool at Hulgaard Elementary. Ever since children have been telling stories about a monster living at the bottom of the pool. A victim of all the school bullies, 11-year-old Lars, has written a love letter for the older girl Sherin. When Sherin’s boyfriend, the worst bad guy in school, finds the letter, he forces Lars to swim to the bottom of the pool to retrieve a shining coin. But Lars is convinced that the monster Aqualorius is waiting in the deep..

A Danish short film about 2 boys who disappeared 2o years ago in a Elementary school pool. The pool is rumored to be the lair of a monster called Aqualorius who lives among the bottom for those who dive to deep. An urban legend, none the less, providing a level of amusement to the children who attend becomes the focal point of this short film. Lars one of the students is challenge by the school bully Jaymz to retrieve a coin located at the bottom if he wants his discovered love letter to stay secret. Lars takes the challenge discovering what lurks among the depths. As Lars emerges it soon becomes clear that he has confronted more than just his own demons.

A short but appropriate piece that takes on the fear of deep waters and the struggles of being a student. The piece was directed by Nikolaj Tarp in 2009 and is a great example of keeping the theme minimal while making an impact. the piece contains some impressive special FX work by Lauge Voigt and his visual fx team. At the time of this review, the piece could be found in its entirety on Dailymotion. Aqualorius! is more than monster movie, it is a statement about adolescence. 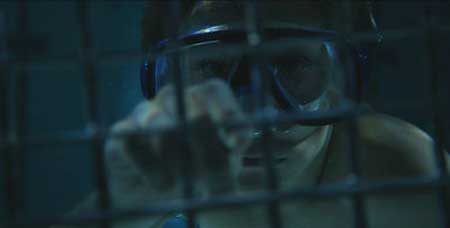