The Zombie Map Kickstarter Infection is Spreading
The reports continue to come in of a spreading infection known as Zombie Map, which started in Tempe, Arizona and spread quickly across the country and now the world. The Zombie Map Kickstarter has uncovered something terrifying – zombies are more than a pop culture fad, they are a nested infestation in our culture that want to come out and play more than just around Halloween. Zombie Map gives them the opportunity to do that. This community is made up of filmmakers and misfits, goth kids and metal heads, parents and their children, cos-players and movie buffs. The list even includes movie stars. 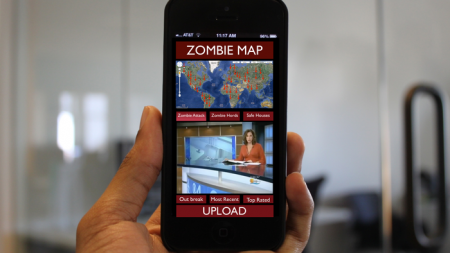 Kip Weeks from the hit horror film, “The Strangers”, and Gabrielle Stone, from the soon to be released “Zombie Killers” and “Speak No Evil”, both endorsed the Zombie Map project and its creator Roze.
Gabrielle Stone says, “Roze will definitely leave his mark on the zombie world with Zombie Map.”
“Remember, spread the infection, spread the love.” says, Kip Weeks
What’s going on? How is it spreading so fast? It’s the filmmakers. There were over 450 writers, directors, producers, cinematographers, art directors, special FX makeup artists, and let’s not forget the Zombies. Hundreds of people came out to be a zombie in a short film – 30 of them to be exact. One Zombie film has been released everyday of the Kickstarter campaign. You can now actually binge watch the first half of the series.
“It was absolutely incredible watching seasoned veteran filmmakers working side by side student filmmakers, and everyone in between was there all for the same reason – Zombie Map,” says Roze.
Zombie Map is a mobile device application and a website that features a video player and a world map. The first video informs the user that the Zombie apocalypse is upon them, and asks people from across the world to document the spread of the infection by shooting and uploading films directly to the map – every film will put another marker on the map, enabling people to track the spread of the infection
To check out Zombie Map go to:
www.kickstarter.com/projects/945868094/zombie-map-app
Share