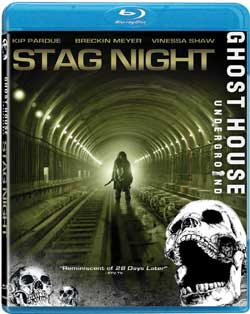 Next time they’ll take a taxi: This is the lesson learned by a group of New Yorkers who, fresh on the heels of a bachelor party, hop on the subway so that they can continue to celebrate in this thriller written and directed by Peter A. Dowling. The night quickly goes south, however, when the gang witnesses the murder of a transit cop in an abandoned subway station. Now, they must traverse the underground tunnels on foot to escape the killers.

There is nothing creepier than what lurk outside what you may think are the safe metal walls that entomb you inside the trains of a subway. What may lurk outside is the topic for Peter A. Dowling’s Action/Thriller Stag Night, in which four bachelor party goers find out why staying in the safe place of the subway train is the best thing to do versus exploring the underground system of rails. A new world is explored, and extreme consequences are bequeathed upon the unfortunate souls just trying to have a good time that night.

The movie gets right on the topic of the subway massacres, showing a young woman running up an escalator covered in blood somewhere in New York City. She is being followed by unseen predators, grunting aloud from her attempt to get away. The monsters behind her switch the escalator in descent, and she is quickly fed to the monsters below.

Mike(Kip Pardue) is standing outside a bar, talking to his fiancée Claire(Rachel Oliva) on the phone. He is reassuring her that everything is alright, and so far his bachelor party has been a descent success. Of course, this is not the case when his troublemaking brother Tony(Breckin Meyer) is pushed out of the bar for being disorderly by a gaggle of bodyguards. Enraged partygoers Joe(Karl Geary) and Carl(Scott Adkins) leave the bar too, not wanting the night to be over for Mike’s sake. They all decide to get a ride on the subway to go find a different bar.

Once upon the train, the guys talk amongst themselves while eying to lone women passengers down seats from them. Tony and Carl go try to work their charm on them, while Mike and Joe discuss best man arrangements for Mike’s wedding. Tony bothers the beautiful bookworm Brita (Vinessa Shaw), and she immediately defends herself by spraying him in the eyes with pepper spray. When the train makes an unexpected stop, the guys and girls get off the train to get some air. Being down in the dark recesses of the underground system of railroad, they aren’t prepared when the train roars back up and takes off.

The group starts walking, desperate in finding a way out of the subway system. They come upon a station platform, and see a cap brutally attacked by three barbaric/caveman creatures and start to panic. They run all the way to where they can see an opening, but cannot figure out how to get out since everything is locked up. The group splits so Carl can get alone time with one of the strippers (the two girls were coming home from their stripping career via subway train), and Carl and his date are attacked by the barbaric creatures. Joe, Mike, Brita, and Tony come upon a house with a dozen dogs tied up behind a chain link fence. The house has 1950’s style features, and a whole mess of weapons. When the barbaric creatures return, they have the bodies of the groups’ friends, and have a suspicion that the have intruders. The group watches their friends’ demise by beheading and fed to the dogs.

The group spends the rest of the movie trying to get away from the barbaric creatures, but have no luck amongst whatever comes across them. The run into many homeless people in the underground rails, and they see the group as disturbances in their world. They use steel bars or whatever strong material to make a clanking sound on the rails in a way of an alert that the barbaric creatures need to come that way to kill the intruders. In the end, the innocent subway goers learn that their best bet was to just stay on the train.

The movie is set mostly within the underground railroad system of the subway, and for the most part really dark and hard to see at some points. I had to adjust the brightness on my television screen in order to see the barbaric murderers, since it was so dark I could barely make out their faces. In closer viewing, I noticed the killers looked somewhere between Rob Zombie from the Hellbilly Deluxe CD meets a barbaric caveman. These guys seemed like they were invincible from the beginning in stature, but were easily killed towards the end of the movie.

The kills were very brutal, ranging from disembowelment to beheading to being fed to a dozen dogs. The death scenes were for the most part slow and dramatic, involving a slow orchestrated musical piece accompanying a slow motion kill. The other members of the group watching the death seemed barely fazed, while attempting to still make their way out of the tunnel. The story is believable, in that many have no clue what could be out there, and gives a sense of wonder what may lie in those tunnels. There are few scenes of female frontal nudity, and mostly gory death scenes and action packed chase scenes gave Stag Night its viewer watch ability.

Peter A. Dowling’s Stag Night encompasses a dark and dreary tale of what happens to some bachelor partygoers that get lost in the underground system of railroads in New York City’s subway system. A strong desire to get out of this maze is what drives the characters into the heart of adventure, and race for their lives being in jeopardy by barbaric underground dwellers.