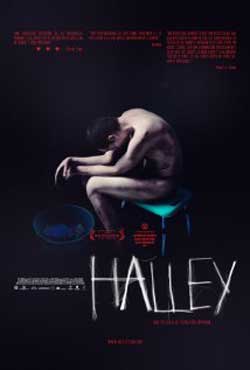 Alberto forms an unusual friendship with Luly, the manager of the 24-hour gym where he works as a night guard.

Despite a pallor that could be indicative of anything from drug addiction to poor diet, Alberto (Alberto Trujillo) is otherwise as innocuous as they come.  Speaking only when directly engaged and rarely looking up from under a drooped head, the few second glances he receives are those of mild fear and concern that there is something not quite right with this dude.  You see friends, Alberto is dead.

“But Rob, wouldn’t that make him a zombie?”  Sort of.  However, to use the term “zombie” would prove misleading in this instance, as the only trait Alberto shares with the overexposed cinematic baddies is that he is slowly decomposing.  He craves no living flesh (or any sustenance for that matter), because his digestive system no longer functions.  He spends his days in a sterile white apartment, cleaning his rotting sores, injecting himself with formaldehyde and picking maggots out of open wounds.  In the evenings, he performs the painstaking ritual of bandaging and perfuming his body before applying makeup to his graying face and heading off to the local gym where he works as a security guard.

“But Rob, zombies don’t have jobs.”  My point exactly.  In fact, the Mexican production “Halley” isn’t genre-related at all, merely utilizing its odd premise as a backdrop for a meticulous meditation on loneliness and withdrawal. Depressing stuff indeed, and director Sebastian Hofmann’s script (co-written by Julio Chavezmontes) never shies away from the suffocating pathos and mundane routine that encompass Alberto’s world.  In his first feature-length effort, Hofmann has created a painstakingly slow character study, one which may turn away even the most stalwart aficionado of nuance.

As his daily physical maintenance becomes more daunting and he grows weaker (having trouble even walking), Alberto decides the time has come to pull away from the land of the breathing.  He puts in notice with his manager Luly (Luly Trueba), who voices her worry that he is silently suffering with illness.  He assures her “It isn’t that serious,” but can no longer maintain the long hours on his feet.  At Luly’s request, he promises her one more week.

This turns out to be a mistake, as Alberto’s commute a few days later results in his collapsing in the bus terminal.  He awakens on a coroner’s table, being prepped for autopsy by an orderly (Hugo Albores).  The predominately one-sided conversation that follows between the two is remarkable in its low-key wonder, as the gentleman is more intrigued than shocked by his resurrected guest.  Unlike Alberto, he wears his need for companionship on his sleeve, begging him stay and talk longer. 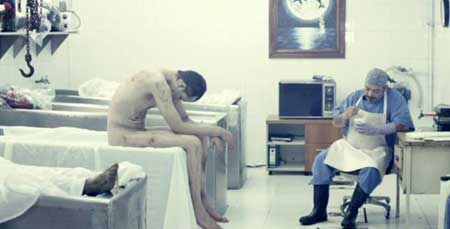 Luly invites Alberto out to dinner after his last shift, and he begrudgingly accepts in what initially felt like a misstep on the film’s part.  Certainly, this could only end badly for one or both of them, and we’re about to witness the kind of horror that one is more accustomed to nuking a bag of popcorn for.  What begins as a possible prelude to convention is the most disarming sequence of the entire enterprise, as Luly tells a childhood story while swirling a flashlight around her apartment in the dark.  This simple tale of loss also informs the title, which was about time because where the hell “Halley” came from was driving me bananas at that point.

Proving to be just another lonely soul, Luly offers her home as a final resting place to a man who may never require a final anything.  As I said, tough stuff, made all the more potent by the performances.  Essentially, this is a one-person show with a love interest and extended cameo, and all three excel given the minimalistic material.  Veteran of Spanish stage and screen Trujillo carries the entirety of the film on his nearly mute shoulders as Alberto, pulling off the tricky characterization with aplomb.  Behind a perpetually slack frown and cloudy eyes, his mannerisms match many we’ve come to know from the typical undead, but he carries a flickering spark of humanity behind the animated death mask.  Truth be told, without a central lead we can give a rat’s ass about, “Halley” would be downright unwatchable. 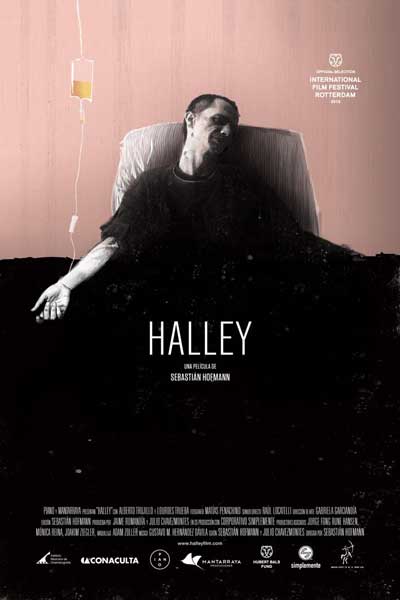 Credit must also be extended (though really, this flick would suck a bag of balls sans Alberto) to Hofmann and cinematographer Matias Penachino for creating a bleak city terrain and allowing glimpses of beauty to filter through the cracks.  An otherworldly sunset outside a bus window is a lovely example of the contrasts they create within their oppressive alternate reality.  Hofman also demonstrates an unflinching eye towards the body horror aspect, embracing a Cronenberg vibe during the scenes.  The last of these is a bona fide shocker, as Alberto makes a desperate attempt at reconnecting to his humanity with disturbing results.  Where Hofmann’s instincts serve him best are in the extended, slow-motion workout scenes within the gym.  The sense of longing our lead feels as he watches a fitness class perform their set becomes our own, and it’s hard not to be transfixed as he is.

The closing bit is a somber tip-of-the-hat to Mary Shelley’s “Frankenstein,” and seals this endeavor’s fate as the most depressing movie I’ve seen yet this year.  One almost can’t in good conscious recommend “Halley” without offering a disclaimer:

It’s slow, friends.  We’re talking molasses in Antarctica slow here.  Stick with it, and the pacing may not bother you so much.  Hell, you may just grow to understand its specific purpose, and that “Halley” couldn’t exist any other way.  Or, you’ll pass out a half-hour in and curse my name for enjoying this garbage.  I’m okay with either outcome.